New to drum & bass? Want us to recommend you some tunes??? PLEASE READ!

hydr0 said:
Cool, thanks for the recommendations. Does anyone still make techstep now or do they just take techstep influences and put it into whaterver dnb they're producing atm?
Click to expand...

Uhhhhh well since production is different now from in the 90's, modern tunes sound kinda different. I mean what is 'techstep'? I dont think there's a legitimate definition (although it mostly refers to that part of 90's dnb) so its kinda up to you as to if it sounds like what ur looking for. As for modern tunes, some have some of that kinda influence. Stuff from dispatch recordings kinda has that old sound i guess. Some stuff especially from SCAR or Nymfo (his older stuff, u could check out his discography at discogs or something) has that kind of techstep vibe imo. Maybe some ulterior motive stuff or maybe Cern. It's definately not the same sound but for all I know, there could be some other guys out there pushing the old sound. There's lots of music to be found, just comes down to how much time you have to kill on the internet.
T

Been into DnB since the age the jungle days about '94 and still a massive fan to say its changed progressively over the years is an understatement but I still love it! Big fan of cre8 dnb digital radio always a good source of new tunes, plus Brackley does banging sessions as do Riss Ross and the others, dnbtv on YouTube have some proper banging sets too most of the time with track listing provided by helpful chaps in the comments section give it a look... As for recommendations it's kinda impossible but for new stuff try Jaydans album, serum, jayline or anything saxxon has remixed lol can't go wrong
N

hello everyone, I am new to this forum and love dnb, my favourit sub-genre is neurofunk I'm into Mefjus, Noisia, BSE and SOM, and labels like Critical, Vision, Eatbrain, Blackout, Program.

Throw some 90s Jungle/DnB warp basslines at me!!!

I feel like this thread doesn't get many regular views, but I hope you guys can help me out. Cheers, Nathan.

On my channel you will find many new talents....
Staplemind: Nedmodex: Exodous: ....and much much more.
T

Freek said:
So you're new to drum & bass and don't know where to begin when looking for new tunes???

Here's a list of previous threads where each style has been covered.

Noob here. Any chance somebody could update the Jungle links from the OP? They don't seem to be working.
Thanks.

johneysvk said:
can you recommend some stuff in this vein?


not quite jungle, a bit techy, but interesting drum edits and stuff...
Click to expand...

Recommendations if I like the Metalheadz Digital show from RinseFM?
this show absolutely blew my mind
https://soundcloud.com/rinsefm%2Fmetalheadz150217
I haven't really listened to DnB for a long time and it was a surprise to me that it was so amazingly good to listen to in 2017, and actually sounds... progressive and new.

Futuristic, the techniques are advancing, and the feeling is STILL there.

I'm wondering if anyone can give me a pointer where to go now to look for stuff that sounds like this. I've already looked into Digital/Spirit and some of the labels mentioned in the show, was wondering if there are any tangents I could go into!
D

<ac said:
Recommendations if I like the Metalheadz Digital show from RinseFM?
this show absolutely blew my mind
https://soundcloud.com/rinsefm%2Fmetalheadz150217
I haven't really listened to DnB for a long time and it was a surprise to me that it was so amazingly good to listen to in 2017, and actually sounds... progressive and new.

Futuristic, the techniques are advancing, and the feeling is STILL there.

I'm wondering if anyone can give me a pointer where to go now to look for stuff that sounds like this. I've already looked into Digital/Spirit and some of the labels mentioned in the show, was wondering if there are any tangents I could go into!
Click to expand...

check out the mixes and tracklisting section on the forum

oh and if you find anything with Loxy on it.. download it.. whatever it is.

try these to start..

https://soundcloud.com/rinsefm%2Frinse-fm-metalheadz-19th-april-2017
you could spend months on Rinse FMs soundcloud... trawling...

God save the queen and the author of this thread. I new and I thanks for these links))
D

Hi all,
Greetings from Dublin. Im new to the forum. I am not really a drum and bass fanas such but have great respect for the sound.
I was a huge Jungle fan back in 94 - 98. I recently revisted my collection, Jungle Massive, Hardcore Junglistic Fever compilations as an example.
Im amazed at how fresh they still sound over 20 years later. Still raw as ever.
My question is...Im looking for newer Drum and Bass and Jungle stuff with that hard Jungle sound.
Ive checked the usual recent compilations and recent Goldie sets etx. but the stuff just isnt Hardcore enough.
Maybe the scene and sound has changed in that long time. But have you any recommendations for drum and bass thats really intricate and hard if that makes sense.
Thanks in advance!
Tony
B

Hi,
I have a certain type of DnB in my mind which I would love to listen to, but as I am just an uneducated occasional listener and there are so many subgenres and artists I don't know where to start searching. I think it is some kind of combination of a standard amen-break jungle rhythm and neurofunk synths (reeces). I have found some examples that somehow come close, but they sound mostly pretty oldschool and I'd like something in modern Noisia-production style with wide Stereo-Synths etc. Here are some examples

At 1:24 it`s just perfect as I imagine my DnB, if it just sounded more polished and modern

At 1:53 is very nice, other sections are a bit too variated for my taste. Yet again sounds pretty old.

At 1:50 it`s good but I'd like a bit more "confused" rhythm (more HiHat 16th-notes) like the classic amen-break. The production sounds more modern than the others but still has that vintage-sound.

If this was an actual track it would be dope! I like the section at 0:44 - 1:03, which I think is an attempt at beatboxing the DnB I have in mind.

So usually the problem I have with what people call Neurofunk, it has great Synths and the production I like but the drumbeats are mostly centred only on Kick and Snare (sometimes even triplet rhythm which IMO lessens the typical nice DnB-flow) and the Hats are pretty simple (some constant 8th-notes if any) and mixed much lower than Kick and Snare. Often it sounds pretty dubstep-trappy. Then there is the older sound where I can find many nice tracks with the drum-groove I like however the synths sound mostly Mono and more Lo-Fi and I would love to hear how that kind of tracks would sound produced by producers similarly skilled to Noisia nowadays.

So any artists (or specific tracks if there aren`t specialized artists) that actively release music that I could check out? And what is the genre called that I am looking for (or what the tracks I posted are part of)?
Hope someone can help me.
D

Prob easier looking for a label associated with that sound and branch out to artists n tunes from that..

Check out this mix 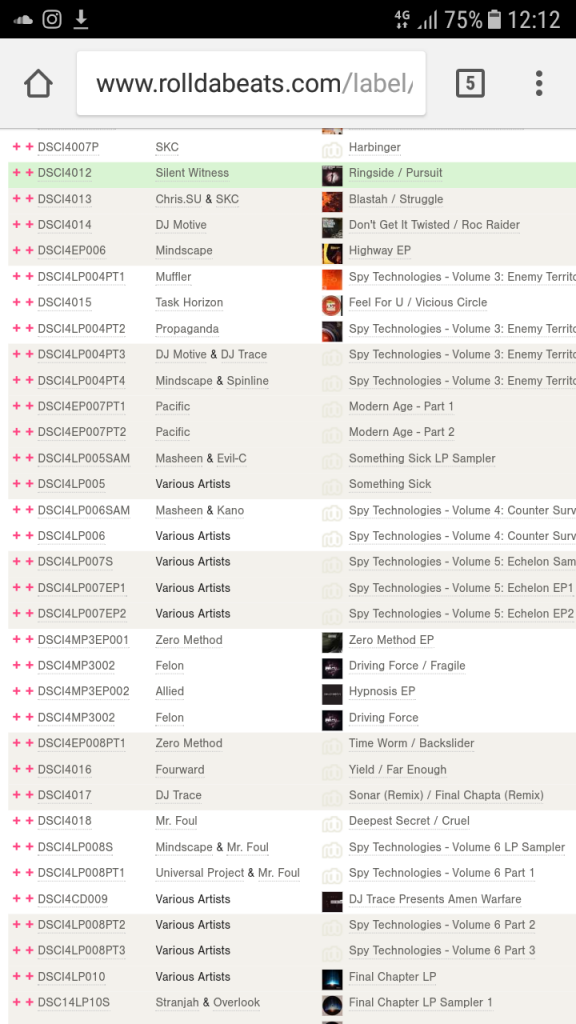 I may be wrong but I think Hybris' album on Invisible is what you're after.
B

Thank you both a lot for the suggestions!

@Catsel: I listened to the mix. Rhythm-wise a lot of the tracks are what I am searching for. Tough I miss those squelchy reece-basses in some, a lot seem to be almost only subbasses. A track with a perfect beat and also pretty nice synths is around 01:07:30, however all of the tracks sound still pretty old. Would be awesome if the same tracks would be made today with updated production/sounddesign. Still have to check out the artists from your screenshot.

@Vydx: you mean "Hybris - Emergence" from 2014? I listened to that on Soundcloud (can't embed the link for some reason). The production/quality is exactely what I like, mindblowing. However only some of the tracks have a groove that is similar to what I would like to find in this quality. The ones that have the right groove are Timeloop and Nightboss, and altough having some very interesting synths I am missing a bit the classic reece like in the tracks I posted. Subversion however is almost exactly what I am looking for, right rhythm and style of synth. Could just be a bit "harder" for my taste.

I reckon that you'd really like LTJ Bukem.... He specialises in intelligent,jazzy,drum and bass... He also teams up with MC Conrad,who isn't too in your face as far as MC,s go... LTJ Bukem,Progression sessions/logical.
T