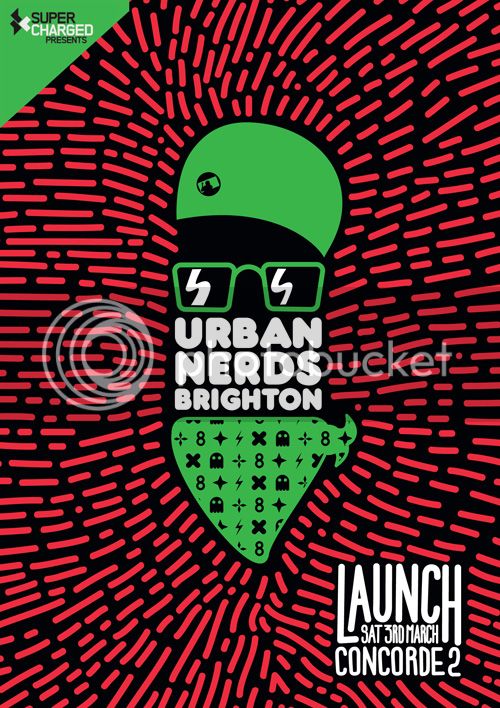 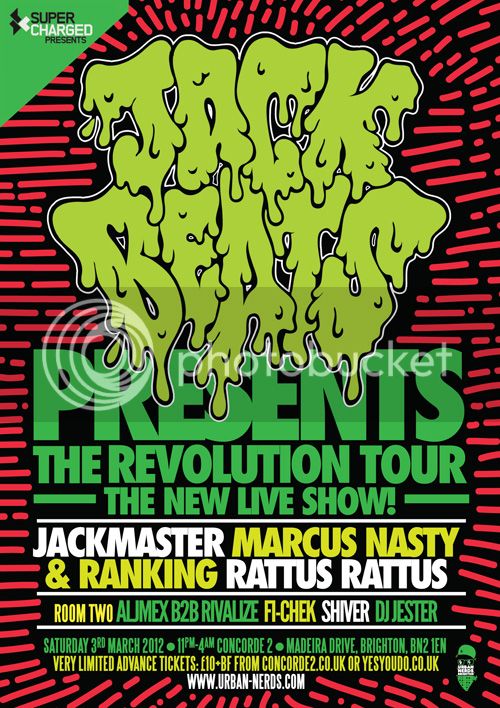 On Saturday 3rd March 2012 Urban Nerds bring the bass to Brighton for our first flat out UN party outside of the Big Smoke, ever! Teaming up with Supercharged, this debut event brings our blend of bass heavy underground electronica to the sunny South Coast on a landmark fifth birthday year.

Marking the occasion, the much anticipated new live show from globe-trotting DJ duo, Jack Beats as they present: The Revolution Tour! The respected pair behind Jack Beats are Niall Dailly a.ka. DJ Plus One (Scratch Perverts) and Ben Griffin (The Mixologists), responsible for huge club smashes ‘U.F.O’, ‘End Of Love’ and Nerds favourite ‘Get Down’. In just five years Jack Beats have firmly cemented their take-no-prisoners club sound that’s comprised of the finest bass infused electro, having produced countless remixes, played global festivals and held down a resident night at Fabric. Soon after their formation they played one of the very first Urban Nerds shows in 2007. Now, five years on Jack Beats come full circle and head up our Brighton launch with a spectacular live showcase featuring mind blowing production designed by the team behind jaw-dropping live showcases for the likes of Deadmau5 and Daft Punk. This is not to be missed!

From one Jack to another, Jack Beats are joined by one of the most celebrated DJs of 2011, the Numbers label head honcho and Fabriclive 57 mixing, Jackmaster! Fresh from smashing Urban Nerds NYE to pieces following an ever-special back-to-back set with Oneman, we’re extremely pleased to welcome Jackmaster back to Urban Nerds for a rare Brighton appearance. A true DJs DJ, it’s impossible to tarnish this man with one sound, true to Nerds’ multi-genre ethos, expect classic garage alongside classic disco, deep dubstep next to Chicago house and everything in between from a DJ who never fails to disappoint!

The most recent addition to the Urban Nerds family Marcus Nasty & Rankin are also on hand with the bassiest underground bombs and the dirtiest of UK funky, representing the full spectrum of British born beats that Marcus has become known for championing on his coveted Rinse FM show. Alongside is long time Nerds resident Rattus Rattus, blending an amalgamation of the dubstep, garage, electro and grime sounds that have come to define UN since Ratty joined the crew way back when!