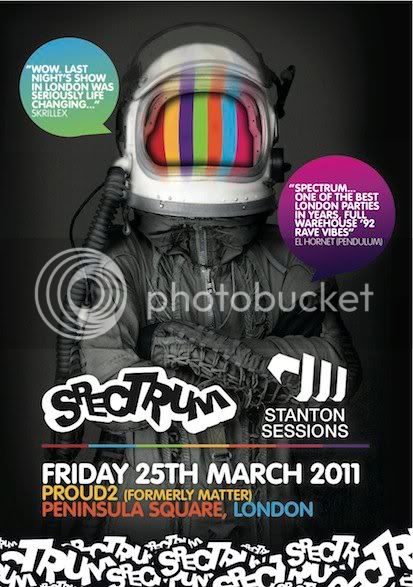 The highly anticipated Decade of Dropping Beats, Spectrum’s 10th Birthday show, is a night that will undoubtedly go down as a one of the best events in the multiple award-winning club brands history. It will most likely also claim a full page in London’s illustrious electronic music history books. Not only did we witness a full house in London’s most talked about warehouse space, Ewer Street Warehouse, but an unprecedentedly hyped crowd kept the venue jam-packed and going off until 6am.

The European debut of Skrillex , alongside the likes of Pendulum, Ms. Dynamite, Joker, Doorly, recently A-listed Modestep, 16 Bit and Spectrum’s founder Pete Jordan made it one of the UK’s biggest line ups this side of festival season.

We are now able to announce that for the next London event we are to move from Ewer Street to Proud2 at the o2. The 2600 capacity club, that in it’s former guise as Matter was voted 6th in the world's best clubs, is set to reopen. With transport links fully restored we are expecting another amazing party in the capital at a venue renowned for its world-class sound system and lighting. We are joined by yet another top draw uniquely programmed multi-genre Spectrum line up, in partnership with one of Matter’s previous resident club events, the Stanton Sessions.

Headlining the proceedings, Stanton Warriors join us for the hotly anticipated launch of their debut artist album entitled “The Warriors”. The duo of Mark Yardley and Dominic Butler have been at the forefront of the electronic music scene for over a decade with massive hits such as Da Virus, Da Antedote, Pop Ya Cork, Slanty, Get Em High and Shake It Up, alongside a endless list of superb remixes have made them one of the most popular acts in dance music. “The Warriors” sees collaborations with vocalists such as Ruby Goe and Hollywood Holt (on the first single off the album, Get Up), Young Fathers, Sporty-O and Jahcoozi and is set for release on March 28th.

Also headlining is Zane Lowe, the undisputed King of Music Radio. Beyond an illustrious career on Radio 1 and MTV, Zane has emerged as one of the finest party rockers out there, using a hip hop mixing style to hype up crowds whilst skipping across genres as wide ranging as rock and electro, through to drum and bass and dubstep.

Keeping with our current love of all things bass orientated, the hot as hell quintet of Joker, Borgore, Bare Noize, Warrior One and Bar9 are guaranteed to test the sound system to its limits. We are also pleased to welcome up and coming producers Metrik and Santero. Metrik has made a real name for himself with a string of huge drum and bass releases on Viper Recordings and Santero recently represented the UK in the Redbull 3Style DJ Competition, and has numerous releases due out on Top Billin, Gung-Ho and Sugarbeat.

Spectrum’s founder and crowd favourite Pete Jordan finishes off the line up in style with his multi-genre take on music. He’s also been busy in the studio with releases and remixes coming out thick and fast in 2011. VJ duo Blend add to the spectacle with their superb visual show.

Tickets starting to move really quickly for March 25th now...
Still at the early bird bargain price of £10... but not for much longer!

A man of many talents - a highly respected, well travelled DJ, creator of the world-renowned Spectrum club brand, producer, journalist and all-round workaholic.

Here are 10 things you might not know about Pete Jordan: