I got my first LP in 1978 from my brother (Kraftwerk's 'The Man Machine' - I was eight years old) and that pretty much triggered some mechanism that made me very interested in music general, specially electronic music. In 1987 I began as a radio DJ via a pirate station, in someone's shed. Lots of ganja was consumed and lots of strange music was played (I always favoured the avant-garde side of things; it seemed that was where the interesting stuff was coming from), and when House Music came along a year later I slowly got more interested in the danceable side of electronic music: Front 242, Skinny Puppy and later one the listenable side of techno like B12 and freaky stuff by Apthex Twin, Autechre, FSOL...

I lived in Almere starting in 1981, but moved to Lelystad in 1993. There, at the local radio station, was a programme that consisted of one hour of happy hardcore, drum n' bass and the occassional jungle tune. I came to take a look and have a chat with the DJs over there, but for some reason that didn't work out very well. Regardless, the drum 'n bass spark was glowing.. Later that year I went to a small festival in Amsterdam in the summer with The Prodigy headlining. Earlier that day, DJs Roni Size and Krust played a long set with their particular kind of Bristol hard-step drum 'n bass. It was a very simple repetitive pattern that was so simple it should have been boring, but somehow wasn't.. about 45 minutes later I had a big smile on my face and was shuffling my feet (a seldom seen phenomena!).

With a bit of pleading and bargaining I got myself a slot on Radio Lelystad, playing my own kind of quirky electronic music, but with a more danceable feel to it. I don't think it attracted much listeners but around that time I was wondering if I could not put out the one-hour show on a website, www.ruffrhythmz.com, named after the show, Ruff Rhythmz. And THAT went rather well you could say! Since 1999 I have been putting out the RR shows on my site, and they have made it around the world.

In 2001 I moved back to Almere, and my radioshow moved with me to another local radio station, Airpeace FM. Almere had about 139.000 inhabitants that time, and I felt I was the only drum n' bass head in the whole of Almere. Because of the frequent visits of just about all dutch drum n' bass DJs (really too many to mention!) my name got around and my work as a club DJ took off as well. I met Arnie of JT-fame a couple of years later (the only heads in Almere at the time!) so we go back a while.

Around 2005 I pretty much felt that drum n' bass was heading in a direction I did not like very much (I still can't stand tunes like 'Bodyrock'!!) and musically I thought I just about heard anything drum n' bass could offer. That is why this promomix contains only records released up to 2004. I did a bit of DJing in clubs with breakbeat tunes with reasonable success, but it was obvious that I had to combine a couple of new things (kids! two of them!) with the things I did. Okay, DJing in clubs was pretty much done, and doing a live radio show every week with a guest DJ in a studio proved quite difficult, too.

jungletrain.net became my new home for drum 'n bass. 1500 records in my collection should be put to good use, so I had a short (one hour) live show on Saturday. I had to combine that with my new studio (mastering and producing, although production wise nothing much has come out as of yet) and that proved difficult, but I think I have found a way to combine that, so hopefully, soon, a new set of Ruff Rhythmz shows will emerge on JT. The Ruff Rhythmz website - true to the original idea of playing eclectic electronic music - puts out a monthly mix that's 100% electronic but has nothing to do with drum n bass, so if you crave for something else (like I did) hop on to www.ruffrhythmz.com. 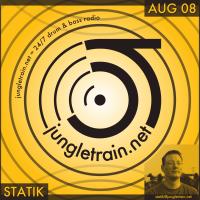 DONATE
Due to the station's non-profit and volunteer-based nature, jungletrain.net relies on donations to survive. Donations are needed to cover monthly server park hosting costs, copyright payments and growing bandwidth costs. DONATE HERE if you want to help.

mate i listen to jungletrain a lot good station just how come u never give the track names and artists when u play a tune??? i think once ive, heard the name artist etc??
Share:
Reddit Pinterest Tumblr WhatsApp Email Share Link
Top Bottom