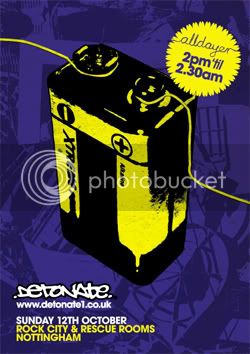 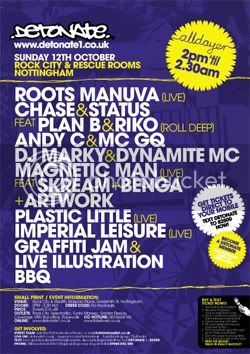 Roots Maunuva (Live)
The rave review in The Guardian named Rodney Smith as 'Britain's pre-emminent hip-hop star, a brit-rap Tom Waits,' and praised a live show and presence that's better and bigger than ever before.

Magnetic Man (Live)
We've managed to secure a return date for the live show which crams together enormous tunes like 'Midnight request line' Benga's 'Night' and '26 basslines', partnering them with a great visual display this act tear the roof off venues everywhere. Not to be missed!

Chase & Status present 'More than a lot'
feat Plan B & Riko (Roll Deep)
The day before the release of their debut LP on Andy C's Ram Records, Chase & Status will take to the Rock City stage accompanied by UK Hip Hop star Plan B and Roll Deep's Riko. Both artists feature on what promises to be a huge album - Radio One are already hammering the Plan B collaboration

Andy C
The DJ, known as “the executioner” for his frenetic style of mixing, often incorporating three decks, will return to Nottingham to put on a display as only he knows how.

DJ Marky
The man from Brazil, who’s ability behind the decks can only be compared with watching Pele play football makes his way to Nottingham to inject some Latin spirit into Rock City.

Plastic Little (Live)
Plastic Little are responsible, almost solely, for bringing the fun back into Hip Hop. But it's not just the humour that sells Plastic Little, there is a biting critique of society at large and an acerbic wit and intelligence that comes with their brand of party music.