Would you eat human meat?

Human flesh is actually very addictive apparently, up to 10 times more addictive than heroin, thats one of the reasons people don't do it.

Cannibalism actually whiped out easter island, they used all the trees to help transport the giant stones to show they could praise their god better, and eventually they ran out of vegetation and turned on themselves.

God i know some useless shit.

Brofski said:
On a side note, I had a Wild Boar burger on Saturday, and it was amazing.
Click to expand...

That is meant to taste the closest to human meat, it smells horrible when it's being cooked.

I wouldn't eat it, I'm a vegetarian anyway (I'm not very good at it, but that's a secret).

The hardest thing to overcome I reckon would the guilty aftertaste, the headfuck that comes from eating another human. I don't have that problem though because I used to work in the city mortuary and know that once a person is dead, its just a big slab of meat.

A friend of mine had actually eaten it before in Indonesia somewhere, but they never told him it was human meat until after he tried it. He said that once you get past the initial shock its not too bad, a bit tough and has a strong flavor.
A

In a word panty No

Castel would eat a 16 year old

Indi said:
I would.

A friend of mine had actually eaten it before in Indonesia somewhere, but they never told him it was human meat until after he tried it. He said that once you get past the initial shock its not too bad, a bit tough and has a strong flavor.
Click to expand...

i think we have a clear winner.
Click to expand...

UUUHUMMM
take a vegetarian that doesnt eat or smoke. and you could have a tasty human! u say stress and excercise? cows are fucking stuck in fields.. that much be very stressful and all they do is walk adn bend down to eat grass.

so i prove you wrong.
G

i think i would eat it. only if it was from a person who wanted me to eat them
E 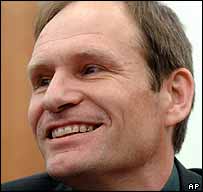 The 41-year-old computer technician is charged with murder, even though the victim allegedly volunteered for his fate by replying to an internet advert.

The gruesome incident was all captured on camcorder and the footage is expected to form part of the evidence.

"I had the fantasy, and in the end I fulfilled it," he said. The fantasy first developed between the ages of eight and 12, he added.

Mr Meiwes spoke of how he felt ignored by his father, and longed for a good-looking younger brother - whom he would bind to himself forever by consuming. 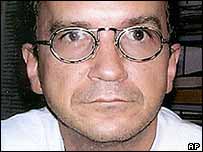 It is Germany's first cannibalism case, and the world's media have gathered in Kassel to watch the proceedings.

Television images showed Mr Meiwes - wearing a jacket and a tie - smiling and talking light-heartedly to his lawyer moments before the trial began.

It was the first time that the self-confessed cannibal had been seen in public since his arrest.

The grisly details of the case caused a sensation in the German media when Mr Meiwes was arrested in December, 2002.

My friend enjoyed dying, death. I only waited horrified for the end after doing the deed. It took so terribly long
Armin Meiwes

In a recent newspaper interview he admitted that he had killed and then partly eaten his victim.

Mr Meiwes advertised on the internet for a well-built male prepared to be slaughtered and then consumed.

"Slim and blond, that would have been the type", he told the court.

The victim, 43-year-old Bernd-Jurgen Brandes, answered the advert in March 2001.

Mr Meiwes told investigators he took Mr Brandes back to his home in Rotenburg, where Mr Brandes agreed to have his penis cut off, which Mr Meiwes then flambéed and served up to eat together.

Prosecutors say Mr Meiwes then stabbed the victim repeatedly in the neck and dissected the corpse.

Legally it is a tricky case, says the BBC's correspondent in Berlin, Ray Furlong.
Cannibalism is not a recognised offence under German law and the defence will argue that, since the victim volunteered, this was no murder.

If the court accepts the defence argument, Mr Meiwes can expect a jail term of up to five years.

But the prosecution will push for a life sentence on the basis that Mr Meiwes is simply too dangerous ever to be released.

Meanwhile, Germans will continue to be treated to a media frenzy that plays on the story's unrivalled shock value.

And among the "highlights" will be the two-hour video that Mr Meiwes took of the whole incident on his camcorder, our correspondent says.

"The public probably won't be excluded from this part of proceedings; we have a tradition of open trials," says legal expert Felix Hardenberg.

"But the panel of judges will show only the relevant parts: what the victim is saying and doing before and during the killing."

Mr Meiwes has said that after his trial he intends to pass the time in jail - if convicted - by writing his memoirs.

The court will hear 38 witnesses and 14 sessions are scheduled in the trial, which is scheduled to end in late January.

The case only came to light when an Austrian student spotted another advertisement placed by Mr Meiwes on the internet and alerted police.

What a fucking madhead
T

no no hypothalamus thats what im talking

Maybe if I ever got my leg amputated i'd try a bit.

adrenochrome you know what im saying

yea....adrenaline from the brain gland innit?

Not unless my life depended on it.