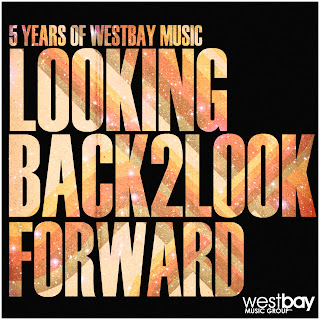 It's been an exiciting year for the Westbay camp. Armanni Reign and Atlantic Connection joined the major leagues working with MTV, Harmonix Games (Dance Central 2), touring, performing and making their first red carpet appearances (Woodie Awards). Submorphics flexed his sound showing the world he's no one trick- pony; His collaborations with vocalist Christina Tamayo grabbed the attention of some of the biggest DJ's in the game and his track "Step in the Spot" featuring Selfsays was one of the most supported d&b tunes this year.

Remixes abounded from the likes of Bro Safari, Flinch, P5 Army (Mason, DStar ect.) and Smog's DLX made an appearance remixing the massive "Follow Me Now" by Armanni Reign & Noah D. That said we have an amazing end of year release for you all. It's been 5 years, yes, 5 insane, intense, fast years. To celebrate we've put together a compilation of some of our favorite Westbay releases mixed up with some brand new remixes. Spanning the now retired Westbay Recordings, Westbay International & Westbay Digital labels, "Looking Back 2 Look Forward" is our perspective retrospect, a way to celebrate where we've come from and where we're going.

We’re excited to announce that along with the retail release, we’ve teamed up with Shapemix iPhone & iPad platform for an exclusive content collaboration including two songs from the compilation that will be available to ShapeMix users to mix & remix.​
Share:
Reddit Pinterest Tumblr WhatsApp Email Share Link
Top Bottom