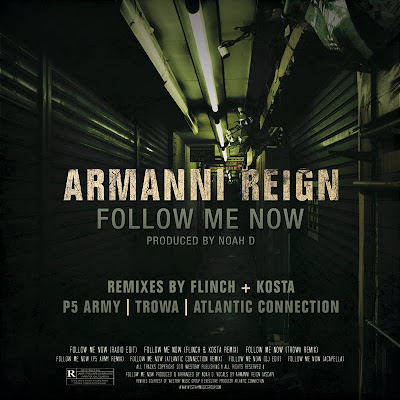 The first official single off Armanni Reign’s highly anticipated EP “Off the Grid” drops 2.22.11. Produced by Noah D, “Follow Me Now” is one stormer of a track. A dubstep anthem at its finest, Follow Me Now merges the best of dark hip hop with the dance floor crushing sound of beats and bass at 140bpms. Noah D’s impeccable skill as an artist producer shines through in this single and to make things even bigger, we had some real special remixes done.

Armanni Reign – Follow Me Now (Flinch & Kosta Remix)
Flinch, one of the hottest producers in the game right now. A recent addition to the massive Trouble & Bass crew, Flinch’s unique and signature sound has garnered attention from the biggest in the game and his collaboration with 12th Planet on the remix of Little Jinders “Youthblood” was hands down, one of the largest dubstep tunes in 2010. Flinch has teamed up with fellow LA producer Kosta delivering an EPIC remix of “Follow Me Now”. Less chaos and more class is the name of the game as Flinch & Kosta create a driving, forward thinking yet dancefloor ready remix.

Armanni Reign – Follow Me Now (P5 Army Remix)
P5 Army. Philly really does harbor some of the grimiest cats in the game; and P5 Army’s remix of “Follow Me Now” confirms this notion. BeasTmode, End Boss, Down Jones &F8 and waste no time in concocting a devastatingly massive remix. This is one of those crush-the-dance floor style remixes, probably apt to start a mosh-pit; honestly.

Armanni Reign – Follow Me Now (Trowa’s Pleiadian Thug Mix)
One of the most promising new artists in 2011 are Trowa. A duo of historical proportions, Trowa are making waves with their remixes of Cassius, Keith MacKenzie and originals on Reid Speed’s Play Me Records. No strangers to the scene both of these cats have been cranking out sonic bliss for a minute now. “Follow Me Now Trowa’s Pleiadian Thug Mix”; is one smasher of a remix. Intricate, dynamic, bass heavy and futuristic; Just the way we like it.

Armanni Reign – Follow Me Now (Atlantic Connection Remix)
No stranger to the game, Atlantic Connection delivers something a bit funkier still retaining the grime of the original. Kicking off around 135 at a nice afro-funky pace, AC’s remix of Follow Me Now keeps things fresh, minimal, low end bouncy. AC is certainly making waves of his own in 2011 pushing a new vibe and sound that meshes liquid funk with global bass, tropical and soul; think beach party in Miami.