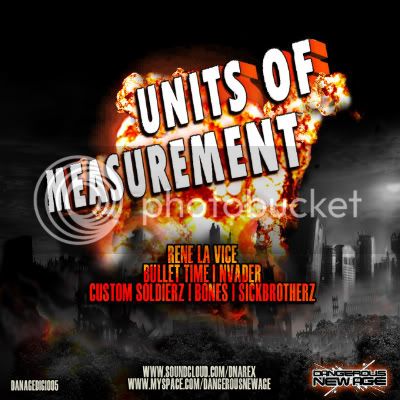 
The Units of measurement EP is the next instalment from Dangerous New Age Recordings. This is our last release for 2010 so we thank anyone that’s supported the label over the last year.

We have carefully selected who we think are the next stars of 2011. A unit of measurement EP features Rene La Vice, Bones, Sickbrotherz, Bullet Time & Nvader plus Custom Soilderz. Put this one on your Christmas list, a must for the dance floor crew. All the artists on this release bring the Rukas.

Immortals start off with a nice set of rolling hats and atmospheric swoosh’s sure to keep any DJs in time throughout the mix. The Ghostly voices bring a spooky feel to the intro adding a great effect. This one is as evil As Emily Rose. Quick call a Priest. Bones is Possessed As the tune builds up to drop we get taken back to the Old Skool Days.

Immortals definitely has them rolling and energetic beats that are sure to make you think about where Drum & Bass all comes from. It’s great that Bones has chosen to bring a bit of the old into the new, and taken it back to the roots but with a little added twist a 2010 makeover. The drop is massive with huge amounts of bass and a dirty Reese on top. This one is 100 percent for the Old Skool Crew.

Bones comes crashing onto Dangerous new age like a stunt man on a Hollywood movie set in a James Bond Movie. 007 business. Immortal gives us something different to add to our catalogue and your collections.

Bones has also made tracks with one of the UKS finest Drum & Bass labels called Cause4Conern He has teamed up with a few of them making some real nasty club bangers. A tune that comes to mind is called Scavengers which came out on Sudden Def LTD, go and check it out. He also has his own radio station and DJS. Look out for bones in 2011 coming at you in full effect.

The Sickbrotherz are out of Germany and are here to make a noise. The Intro is quite simple but gets straight to the point, no messing around here! Big Phat Kick drums layered over with hats and spacey noises keep your ears interested all the way through the intro. Sickbrotherz start to bring the tune to the biting point by modulating the drums and filtering us into the drop of the tune.

Stand still has an industrial feel about like a steel factory on over drive. Even the Man of steel can’t touch this. The tune speaks to you as it rolls through and has some unusual samples throughout making it something Unique.
The whole track sounds very clean and is, very well mixed down It’s the first time we have signed a tune in this style but I don’t think we could of found better people for the job Sickbrotherz are keeping it murky like dark waters.

The Sickbrotherz are also promoters of the Therapy Sessions and also run their own nights in Germany so away from producing they have their hands full bringing Germany some of the best Drum & Bass nights. Be sure to look out for more of the Sickbrotherz. Because it’s about to get Sicker.

We call Rene La Vice back once again to Dangerous New Age Recordings. This time he is back to remix Fortress which came out on the Flood Warning LP early this year. Rene is getting a lot of attention at the moment as is following in the footsteps of one of the best known producers in Canada called Psidream.

Rene has also been getting his tunes over looked over by two of the leading Drum & Bass Producers in the scene J Majik & Wickaman. So not bad going at all there for Mr Vice.

The remix of Fortress brings you instantly into thinking you could be on the battlements of a castle overlooking a battle ground. Just as the original did,
Rene has changed the sequence of the Piano and added some brilliant new choir vocals to help give it its new coat of armour. The bassline has a new feel to it to Just like Immortals its one of them deep Reese drops. You know the ones that make you go nuts on a dance floor. All in all a great remix from Rene La Vice and someone you should keep an eye on.

Vice has also done a monster Dubstep remix with Keri Greenaway called Tell me. It features artists such as Divine Elements, Task Horizon, Patrick Felony ( Kryteria) & DJ Phono, Nuerygma & Nazco Rico & Scoop. Tell me is coming to the UK on a huge club and radio promotion campaign in 2011 be sure to keep your ears open for Renes Dubstep remix. It’s just another side to what this guy can do.

Bullet Time & Nvader you probably have not heard of but believe me when you hear this tune you will never forget the names. They come from Russia and as crazy as it seems this is their first signing so it’s definitely good to have them here first. Other side is a as Nuero as it comes. Russia does it again another set of quality producer to follow in the lines of Sub Wave, Da Vip & Encode etc etc.

Russian DNB producers have been getting a lot of attention recently in fact so much that Knowledge magazine did a Russian DNB special. And these guys are no different from any of the names mentioned in the list above.
Other side is a nonstop ride into beats and bass and is flooded with nasty Neuro noises making you keep turning that volume dial up.

This track is another example of why Russian DNB producers are getting so much attention from the top labels. Great work on this tune meaty and nasty. And fits Dangerous New Age like a Bank robber to his balaclava. Stronger then Vodka.

Custom Soliderz touchdown for the first time on Dangerous New Age Recordings and give us Emperors march. They are from Puerto rico and the USA. Custom Soliderz are 3 guys who have teamed up to become one ultimate team. It won’t be long before these guys will be household names. I think 2011 is going to be their year so this is the warm up phrase before global domination.

They have all ready signed with labels like Mindtech, Close2Death, Trust in Music and Fall Out, to name a few. Emperors March is a massive dance floor tune and one that the MC’s will love to flow to.
The intro to Emperors March is very well executed and worked out with a catchy hook line and a sequence of hats and drums that creeps up on you like a heart attack.

Emperors March is one of them tunes that will get stuck in your head. Like an ex girlfriends telephone number. The drop is dirtier than a Prostitute and as nasty as the Punisher on a weekend in Amsterdam
This track has it all huge amounts of energy and lots of variations in the tune. Keeping you on your feet at all times during the duration of the track. Dangerous New Age are happy to have Custom Soilderz as part of the team and after hearing some of their tunes have decided to ask them to remix a Live Summits track featuring AnnGree.

This will be released next year on Live & Dangerous Look out for it. It’s time to to lock load and fire!!!! Because the Special Forces are here, and their called the Custom Soilderz.