This night will showcase some of san antonio's best deejay'z and emcee'z combining forces to give all the bass headz out there some serious,
pure ,raw full effective and addictive rythymz to vibe out to. On this
night two of the hardest crewz in S.A get together to show all of texas that San Antonio has some supa sick deejayz and emcee'z that are ready to make noise for south texas edm culture. Please share this with every one and be ready for
"UNITED BASS HEADZ" 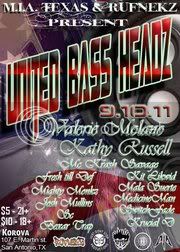 Valerie Molano is a true Diva on the decks. Whether it’s djing across South Texas or New York playing alongside Headliners such as DJ Icey, Keith Mackenzie, DJ Fixx, Designer Drugs, LionDub, Vibesquad, Glitchmob and many more, V brings the proper bass to the place when she gets behind the decks! She started as a hard house DJ in 2001 and over the years transformed into a real chameleon selectress mixing tech, electro house, breaks, fidget and dubstep throughout San Antonio & Austin Texas. In the end of 10' she moved to NYC and has been bass mobbin the scene in Upstate New York, Brooklyn and NYC droppin a unique blend of dubstep, glitch & hip hop!

"The Reverend Kathy Russell is one of the most legendary and bad-ass dj's Texas has to offer. For years her hi-octane drum and bass sets have obliterated dancefloors all over America. Hailing from Austin, she got her start doing an ambient show called "Rainbow Freestyle" on KVRX 91.7 radio in 1995. Within weeks she began getting booked at chill rooms and raves, with bootleg mixtapes of the show reaching as far as New York and London.

To this day Kathy has earned the reputation for being the cream of the crop when it comes to face-melting, soul-moving drum and bass assaults. Most recently she has become a proud member of Everydayjunglist - a collective quickly becoming the premiere crew in Texas Drum and Bass. As a producer, she has put out several downtempo and drum and bass releases on We Records, Silky Sensations, and RocknBass, with more currently in the works. When you want the best, you want the Reverend Kathy Russell. And yes, she is a real Reverend."