Out this Monday on the Viper shop guys 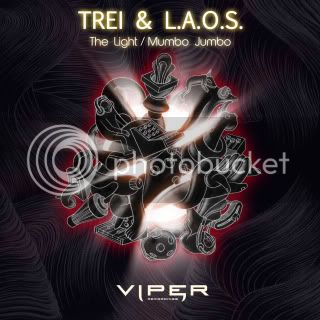 https://soundcloud.com/viperrecordings%2Ftrei-and-laos-the-light
https://soundcloud.com/viperrecordings%2Ftrei-mumbo-jumbo
Viper Recordings sister label, Viper VIP has been a launching pad in many careers of today’s hottest producers. Viper VIP has seen the likes of Metrik, InsideInfo, DJ Samurai (one half of DC Breaks), Camo & Krooked, Furlonge, Uman (one half of Blokhe4d), and Smooth all get their first big breaks into the scene on the label.

Following in that tradition, New Zealand’s Trei has teamed up with Finland’s L.A.O.S. (Large Amount Of Soul) to deliver a blazing twelve-inch. Having both made names for themselves individually on prestigious labels such as Hospital Records, Spearhead Recordings, Shogun Ltd, Critical Music, and Commercial Suicide, Trei & L.A.O.S. now make their debut on Viper VIP in grand style with the hauntingly soulful, but equally banging, ‘The Light’. Going heavier on the flip, ‘The Light’ is backed by a solo effort by Trei, unforgettably entitled ‘Mumbo Jumbo’, a bongo-filled, dancefloor killer which will make you think you’ve landed smack in the middle of a Sergio Leone spaghetti western, while leaving a dusty trail of sweaty ravers in its wake.

Both very strong bits there! Big up Tim!

The Light is huge! Mumbo Jumbo will grow on me for sure.
M

Massive release, two very different tunes but feeling them both

Chair of the Nitty Gritty Committee

Like mumbo and have only just heard the light. Thats defo going to be spending some time on the deck!

mumbo jumbo is the one
T

I patiently await the vinyl release

Wicked release though either way, Mumbo Jumbo is quality!

I will deff be bagging this,

Mumbo Jumbo is wicked! Best bit from him since Thunder Biscuit IMO, largeness.

Wicked release though either way, Mumbo Jumbo is quality!
Click to expand...

Don't be too patient

Chair of the Nitty Gritty Committee

word man! exactly my thoughts, thunder biscuit was ace back in the day

wingz said:
word man! exactly my thoughts, thunder biscuit was ace back in the day
Click to expand...

It's still ace for me!