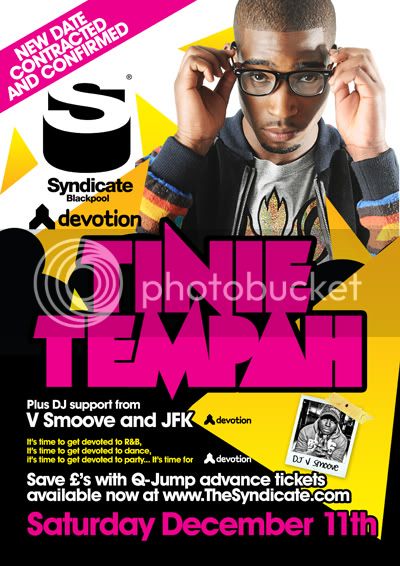 Due to circumstance beyond the control of both The Syndicate Blackpool and Tinie Tempah’s management, the original date of this event on October 23rd was postponed.

We would jointly like to apologise to all the loyal Tinie Tempah fans that made the trip to Blackpool and were disappointed. The unforeseen problems with Tinie Tempah’s transport on the day meant that his journey was cut short at the very last minute.

Since that date we have been working tirelessly to find an appropriate rescheduled date to please all of his loyal followers.
Tinie has cleared his diary especially for us in Blackpool and we are pleased to announce the new rescheduled date is DECEMBER 11th 2010.

We know that a lot of fans were disappointed when the first appearance did not materialise so at The Syndicate we have been trying to come up with a plan as to how we can repay your loyalty and trust in us.

So here is the plan:

All those that bought one paper ticket from our vast number of ticket sellers please contact them immediately and they will issue you with two tickets when we have had them printed in the next few days!
We did issue all those that left on the night of Oct 23rd with one replacement voucher/ticket to come to the rearranged show. These are still valid and what’s more we will let anyone in with one of those tickets bring a friend for free!

Neil Jennings club manager stated: ‘I am sure you will agree that this is the fantastic deal and is just our humble way of saying we are sorry ,sometimes these things beyond our control but we want to make it up to you in the best way possible’

Anyone else who wants to attend this one off event can now purchase tickets for just £5 online... thats right...

ONLY A FIVER TO SEE TINIE TEMPAH!

Consider it our present to you... Christmas just came early!

Some background on Tinie Tempah

The arrival of So Solid Crew was a significant moment for many UK Garage fans; for 12 year-old Patrick Okogwu it turned out to be seminal. When he heard that the 30-strong Crew were shooting their new video near his home of Plumstead, he camped out to be first in line to collect autographs and marvel at their state-of-the-art mobile phones and limited edition Moshino jeans. “I wanted to be in So Solid so badly,” remembers Okogwu “That day, watching them make the video, I realized that this is where it was at for me. I didn’t want to do anything else.”

Okogwu’s fascination didn’t falter; his love for garage and grime grew after discovering MC’s like Dizzee Rascal on pirate radio station Déjà Vu. Two years later, the 14 year-old snuck out of his house to attend Wiley’s infamous rave, Eskimo Dance. He had no idea then that in four years time he’d appear on the Godfather of Grime’s album, Playtime Is Over. All the big players were there; Lethal B, Wiley, Tinchy… Okogwu surveyed their superhero status, confirming further what he already knew; he had to be an MC.

Choosing his name after distractedly flicking through a Thesaurus during a Year 8 Citizenship class, Tinie’s career started out small, rapping to his class-mates in the playground. Yet, within a matter months, his skills, contacts and determination progressed exponentially

Musically, Tinie’s mum filled her son’s ears with the sounds of Dolly Parton and Gregory Issacs, leading him to be experimental with his own musical tastes in later years. “I love everything from Britney to Busta Rhymes,” points out the Regina Spektor, Calvin Harris and Kanye fan. Whether sampling Fleetwood Mac or Duran Duran on the incredible track Girls On Film, Tinie reflects his assorted musical interests in his forthcoming debut, which will showcase not only his lyrical abilities, but his appreciation for an array of sounds, from gritty grime to pop-tinted R&B and dance. Taking care to sidestep the tried and tested electro-pop route, the diverse and imaginative debut features a collaboration with Omarion and production from underground beatmakers True Tiger and Rude Kid, as well as renowned dance producers The Wideboys and Agent X.

“As I made the album I realised there’s a lot more to music than being whisked about in cabs and having the latest phone,” says Tinie, referring to his 12 year-old self watching So Solid at their shoot. “It’s a lot of hard work that goes into it. My goal, my aim is to be a superstar, but not in a cheesy way,” he decides. “I want to go to America and do what they do. But better! I have so much ambition. I feel like even if I got a No.1, I still wouldn’t be satisfied. There’s so much more you can do.”

With N-Dubz, Dizzee, Tinchy and Chipmunk achieving huge commercial success, the stage is set for the leader of the new school to step into the spotlight. He may be small in stature, but Tinie Tempah clearly has a huge career ahead of him. Not only encapsulating the do-it-yourself ethos of 2009, Tinie Tempah is the sound of 2010.

Advance tickets can be purchased from the club offices during office hours or you can buy them online here: https://thesyndicateblackpool.clubticks.com/ 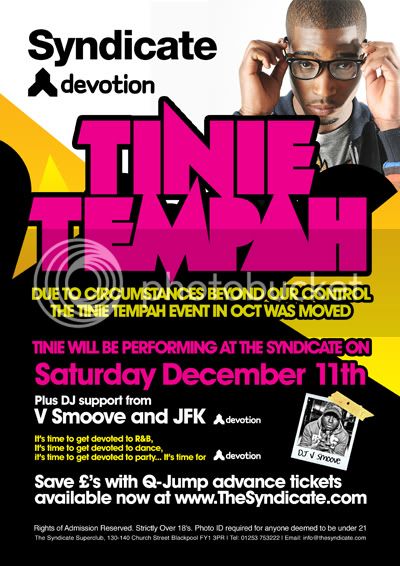