Substance is back and it is bigger, badder and more brutal than ever. On the 24th of October ‘My House’ will be crammed full of Leeds debuts comprising of some of the sickest DJs, live sets and beatbox madness.

There are loads more on youtube.com but I thought these were pretty special!!

I:Gor, the man behind ADHD records, is coming to Leeds for the first time from Poland to throw down a live set of hardcore and gabba. He has had legendary hardcore tracks released on Deathchant and Pacemaker. His upcoming releases on Sustained Records prove how he can also produce outstandingly heavy drum n bass that owns the dancefloor.

Donny has recently taken over Barcode Recordings and has had some blistering releases on Algorythm and Future Sickness Recordings. In the past he has collaborated with the likes of Current Value and is responsible for making some of the most obscene experimental drum n bass out there. Checkout the barcode filthcasts for a sneaky peaky of what he is about.

MacheeeN Boi is playing b2b with Dissonance and will be dropping some heavy beats as the Leeds debut of ‘The Jo Brand Experience’. Gashfest saw the first b2b outing for this ‘experience’ and it became apparent there drum n bass n core tastes complimented each other like hammers and babies.

Lee Plastic, who used to put on Crash bang Wallop with Mertcore is known for his high energy snare filled breakcore and gabba live sets. Leeds is a lamer place without Crash Bang Wallop so its well safe to have the artist formerly known as Monster Plastic on the bill


Room 2 will have plenty of Jungle / Dub / Electronica / Breaks

Ant Orange, the local superstar and pin up poster boy for stoner jungle, is gracing us with his presence again. He has set up the Dead Channel net label and has featured on Dirty Load Records. His production skills keep getting better and better and his DJ sets can be an eclectic mish mash of jungle, hip hop, electronica and all round safeness.

Nesh is a demon when it comes to glitched out electronica. His live sets can have a Squarepusher esque feel to them, especially when he whops out his bass guitar and creates some booty shaking jungle bass lines.

Jimi Burnz has been DJing for 12 years. Over the years he has played almost every style of dance music but for his Substance debut he will be playing a glitched up, bass heavy breaks set. Not only does he bring the beefy breaks, tight mixing and an electric stage presence but last time he played at ‘My House’ he ended up loosing most of his clothes! This guy is a legend

Primal and Link 1are part of the Future Roots Soundsystem crew and will be doing a b2b set that will comprise of dub, techno and whatever else they feel like.


For more info check out www.myspace.com/substanceleeds

Advanced tickets are £12 and can be purchased from Ticketweb .

There will be drinks offers at the club

10% of the profit goes to environmental causes

Click here here for a map to the club. It is really close to the main bus station in town 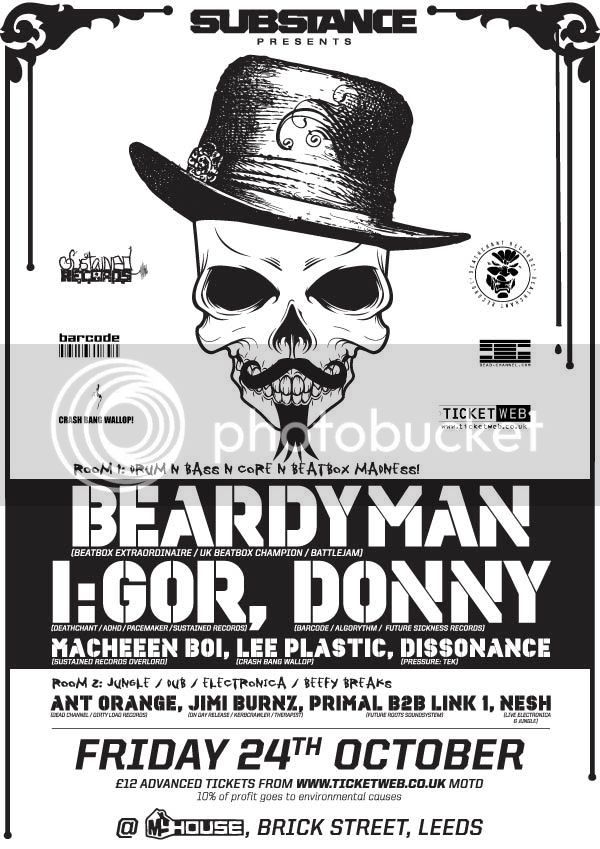