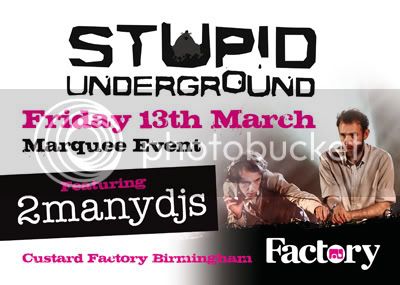 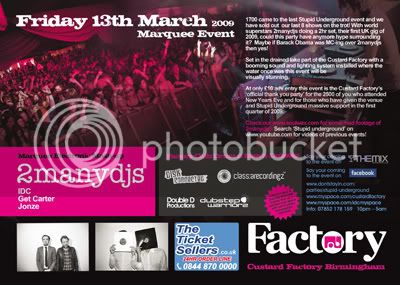 
1700 came to the last Stupid Underground event and we have sold out our last 8 shows on the trot! With world superstars, 2manydjs playing a 2 hour set, their first UK gig of 2009 and their only UK date before their UK Tour in June, could this party have any more hype surrounding it? Maybe if Barack Obama was MC-ing over 2manydjs then yes!

Set in the drained lake part of the Custard Factory with a booming sound & lighting system installed where the water once was this event will be visually stunning.

At only £10 advanced entry this event is the Custard Factory’s ‘official thank you party’ for the 2500 of you who attended New Years Eve and for those who have given the venue and Stupid Underground massive support in the first quarter of 2009.

IDC will be supporting 2manydjs. This guy is making some big waves with some BIG productions.

"This is the most pissed up, drugged up, headfuck of a record that I’ve heard in a very long time, it makes The Prodigy sound like they’ve got The X Factor."
DMC Update 5 stars Jan 2009 ZZUB Chart ‘Hot One’

Check out http://www.soulwax.com to view some mad footage of 2manydjs!

Search ‘Stupid Underground’ on http://www.youtube.com for videos of previous events!

Add yourself to the event on the following websites;

Look out for the "Jenkins Crank It Remix" of IDC's Imaginary Bones which is out to download on April 6th on Corsair. Its a jump up d&b number, which has been reviewed in the new iDJ mag, here is the review:

IDC
Imaginary Bones [Jenkins Crank It Up Remix]
Corsair Records (UK), CR021
Zeitgeisty electro darling IDC’s handiwork transmorphs wonderfully into a nifty little gem for the wee dancefloor hours, here – with more than a touch of Hospital razzmatazz and Danny Byrd synth-sexiness about it. Vocoder-widdled vocal sniplets, catchy filtered noodlings, glitzy FX and an irrepressible flotilla of peppy midrange hooverings all add up to a rather smart take on the jump-up template. Get involved.