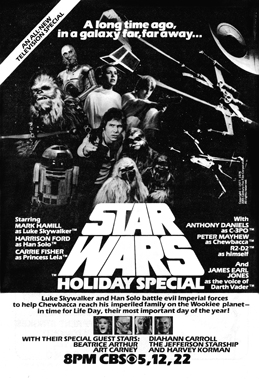 The Star Wars Holiday Special was a two-hour television special (including commercials) set in the Star Wars galaxy. It was the first official Star Wars spinoff produced. It was directed by Steve Binder. In it, Chewbacca and Han Solo visit Kashyyyk, Chewbacca's home world, to celebrate Life Day. Along the way, they are pursued by agents of the Galactic Empire who are searching for rebels on the planet. The special introduces three members of Chewbacca's family: his father Attichitcuk, his wife Mallatobuck, and his son Lumpawarrump.

The main storyline of the film, which is set in 2 ABY, transpires on Kashyyyk. During the film, scenes also take place in outer space and in spacecraft including the Millennium Falcon and an Imperial Star Destroyer. The variety-show segments and cartoon introduce a few other locales, such as a cantina on the desert planet of Tatooine and a gooey, reddish water planet known as Panna.

The film is notorious for its negative reception. George Lucas had limited involvement with the film's production, and he was unhappy with the results. David Acomba, a classmate of George's at U. S. C. film school, had been selected to direct the special, but he chose to leave the project, a decision supported by Lucas. The special has never been re-aired or officially released on video, but has been widely bootlegged by fans, many of whom consider it ironically hilarious or kitschy.

Carrie is drugged out sweetly.

Will check this later, cheers fran

no danger my friend, its pretty funny!

Safe Fran, will check this in a bit man.