Wow, did we get lucky on this one or what!!! We got the last remaining copies of these CD's that were originally released to VIP only, but we were able to get our hands on this strictly limited CD pressings back from 1995! Pressed on a (2xCD) pak with a lot of unreleased exclusive remixes. The first CD is unmixed and the second CD is mixed by DJ Ron and all the Don MC's of that time. One of the most amazing recordings ever. If you want to hear how the energy was back in the Ragga Jungle peak year of 95', this is the CD to get! The following tracks CD1: DJ Ron - African Chant (EX VIP RMX)/ DJ Hype - Hit Man (RMX)/ London's Most Wanted - Girls Dem Want It (EX VIP Mix)/ The Man With No Name - VIP (Exclusive)/ Roni Size - All The Crew/ Kenny Ken - Every Man (EX VIP Mix)/ DJ Ron - New School Beats (Exclusive)/ Bizzy Bee - 16 Track Thing/ Roni Size - Phizical/ Randall - Melody Madness (EX VIP Mix), DJ Ron - Crackman (EX VIP Mix)/ Trinity - Gangsta/ Rock & Vibes - Butter Pan Sound (Exclusive)/ DJ Nut Nut - Special Dedication/ Johnny Jungle - Killa Sound/ and DJ Gun Shot - Regulators (Exclusive). On CD2: Mixed CD by DJ Ron of all the tracks featuring MC Moose, MC Five-O, MC Navigator, MC Det, and The Ragga Twins!!!

Remember this is a very rare piece, but we were able to get a good amount of them, so we could offer you this good price!! Coming from a very small jungle label which was an offshoot of the 1995 VIP Champagne Bash promotion company which put on nights / raves which were part of the London jungle pirate station KOOL FM 94.5. The
label was set up to release special compilations holding exclusive records and mixes from the KOOL FM stable. 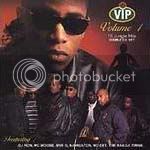