It's that time again.. Obey! is back again with another sick line up of musical treats from across the Bass music world! Following on from our hugely successful last event with Andy Mac and Orphan101 we bring you the best in carnival vibes on the opening night of Cardiff's Big Weekend. 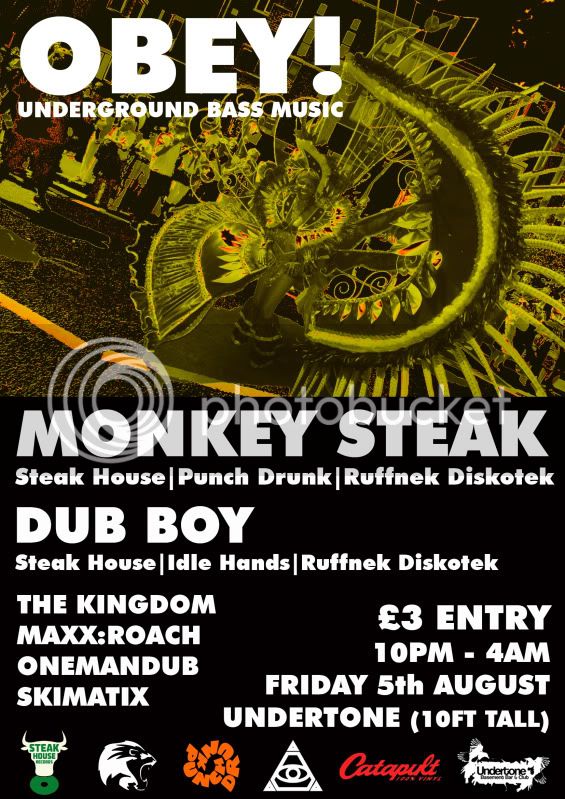 For this event, we bring you a Steak House Records showcase... come Boomtown Fair warmup party. Steak House is Bristol based record label which releases Global Garage, Carnival Beats and Tropical House and run by one of the founders of Bristol's premier Bass Music night Ruffneck Diskotek.

Monkey Steak is comprised of members Atki2 and Hanuman. The pair have been around since the start of the dubstep movement and constantly pushing the boundries of the UK sound. Respected by many of the Bass Music scenes heavy weights (such as Starkey, Pinch, Cardopusher, Murderbot and RSD to name a few..) they are starting to make big waves on the UK Bass scene with appearances at Underhill Festival, Boomtown, Alfresco Disco and Boom Festival bringing their trademark tropical sound to the greater public.

Bristols Dub Boy is a DJ, producer & promoter of the Ruffnek Diskotek, Monster Bass & Karnival events. Reknowned right across the UK as one of the best reggae and bashment selector on the isle. You'll probably have caught him playing at a huge number of places including but not limited to Outlook Festival, Glade and St Pauls Carnival....
Put best in his own words "I make girls shake their bums"