MC wants to kill me!!

right, i wont go to any specific details as to avoid further persecution.
but i went to a gig on saturday, and the music was absolutely amazing, but as per usual the mc couldnt not stop yapping. Seeing that i was quite drunk, i thought it would be funny to tell the mc to stop. So surely enough, whilst i was on the dancefloor and the MC was looking towards me from the booth, i brought my finger towards my lips and did the "Shh" face.
At most, i was expecting for him to give me the finger or something, and continue with his blaberring.
Ha! was i in for a suprise!
Immediately he got on the mic and started shouting "pussyhole! i'll lynch ya, Lynch ya! Fuck you!"
i laughed!
and even later on, after he did a bit more of "MCing" he just pointed at me, and once he had my attention, he proceeded to give me the slice-your-throat thing, by moving his finger across his neck. At that point i shrugged my shoulders, gave him the piece hand sign, to not much avail, as he just did the slice your throat thing again.

Right. So im like wtf ? what sort of person will stop his set to return some critique from the crowd ? i mean, everyone else in the club was absolutely loving his stuff, and was bigging him up. And a single sign of disapproval is enough to turn him all gangster ? i mean, do we beat down the people who dont like us ? How insecure does one need to be to react like this ?
Am i wrong in doing this ? i had an argument with one of my best friends when i told him about this, and he was like "you shouldn't have done this, thats very disrespectful" to which i was like "motherfucker, are you my friend or his ? he says he wants to kill me for just telling him something, and you get his side?"

So yeah, the discussion points id like to stress here are:
A. Whether the MC's reaction was over the top and unnecessary,
B. whether my friend has been a cock for not taking my side

Fuck that - tell us which MC it was then we'll talk...

a. he sounds like an amature, any professional would have just shrugged this off and got on with his job....

b. your friend needs slapping upside his head, seriously.
S

A . thats quite funny tellin him to shh , but yea he did over react i wuld of just ignored u or if i was that good of an mc i wuld of just made a few lyrics about u

B . i wuldnt of expected my mates to say anything really unless he actually come over n tried killin u , but i wuldnt expect them to not be on my side
S

Come on Gord spill the heinz...
Who was the MC who couldnt hack it...

actually. i reckon this was at that hardware thing on saturday right?
B

and also your mate is a cock for not taking your side....

buti personally wouldnt do that because it can lead to you getting jumped by 10 of the bastards after the rave.

Give us the MC's name bitch! 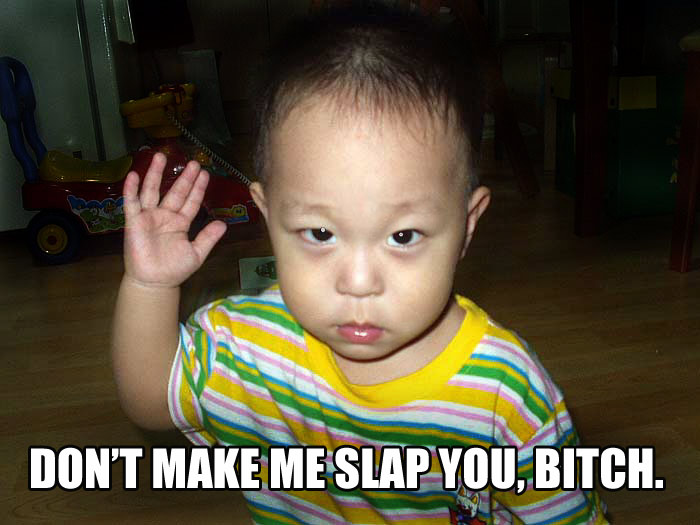 haha ...i wud laugh if he went il semi automatic blap blap blap u bitch

Personally I would have been done with it and shot him in the head right then and there...

I always carry a gun when I go out raving, everyone knows how cool it is, besides I listen to a lot of hip hop, and guns just seem so glamarous these days...

I wouldnt reccomend doing this at an illegal rave. One of my mates told a local mc to shut up and cut the mic, the geezer jumped down, beat 7 shades of shit out of him then preceeded to spit as before. It resulted in a full scale fight, which isnt what raves are about in my eyes. I dunno, it is the guys profession, so maybe he might of took it disrespectfully, which it kinda must of been intended to be. I would of just ignored you though to be honest.
M

GorDo said:
Am i wrong in doing this ?
Click to expand...

absolutely not. some mc's don't know when to shut the fuck up. I once threw ice at the an mc haha. He didn't know who it was. It was pretty funny.

Ahhhhhh, that's hilarious.
The MC's obviously a prick, what you were saying was just constructive criticism right?! Ha ha. I mean some of them really do need to shut the fuck up & never get on the mic again.
As for your mate, he needs a poke in the eye!
G

BoudiCat said:
Ahhhhhh, that's hilarious.
The MC's obviously a prick, what you were saying was just constructive criticism right?! Ha ha. I mean some of them really do need to shut the fuck up & never get on the mic again.
As for your mate, he needs a poke in the eye!
Click to expand...

the mcs obviously a bitch..he gets poked enough