lol, this could be a worthy topic for waffle 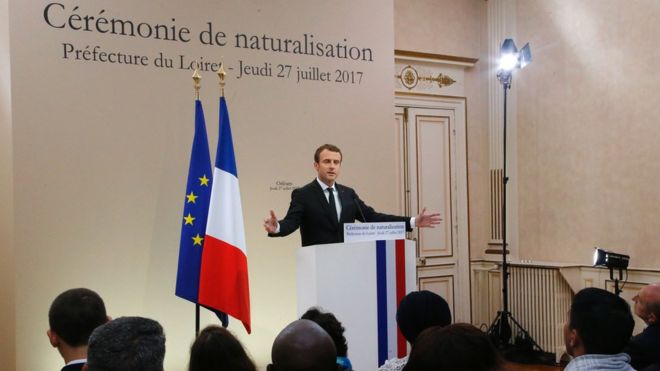 President Emmanuel Macron during a citizenship ceremony in Orleans in 2017

A French appeals court has upheld a ruling denying an Algerian woman citizenship after she refused to shake the hand of a senior official.

The woman, who has not been named, said her "religious beliefs" prevented her from shaking the hand of the male official in the citizenship ceremony.

A government ruling said it showed she was "not assimilated into the French community" and denied her citizenship.

She appealed, but France's highest administrative court upheld the ruling.

The Algerian woman has been married to a French man since 2010.

At her 2016 citizenship ceremony in the south-eastern Isère region, around Grenoble, she refused to shake hands with the presiding senior official or a local politician.

In Islamic teaching, handshakes between unrelated men and women are usually prohibited. 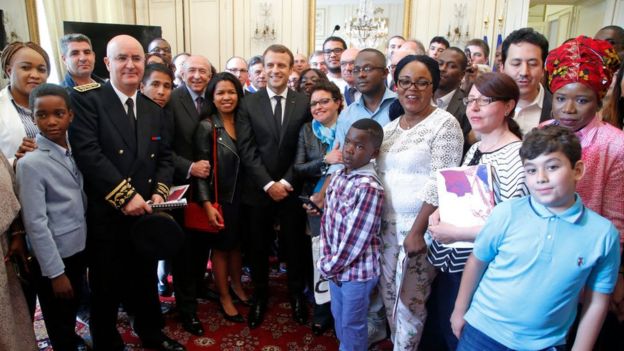 The government then denied her naturalisation, saying she was "not assimilated" for avoiding the symbolic ritual.

This is one of the reasons the state can deny citizenship to the spouse of a national under the country's civil code.

The Algerian woman called the decision an "abuse of power", but the Council of State has upheld the ruling.

France's court of last appeal said the government has not "improperly applied" the law.

In 2016, a Swiss regional authority ruled that two Muslim pupils at a Swiss school had to shake hands with their female teacher, or face a fine.

Their previous exemption from the tradition had caused outrage in the country.

AHHHH HAAAAA FUCKING FRENCH assholes. The amazing Donald Trump once said "Grab em by the pussy!" This is why Fracne sucks ass, they are all worried about handshakes and menage a trois, and not grabbing women were it counts,.. the pussy. Pepe Le Pew once said, "oh oh ohnn ohnn mon sheri, je voudrais manger ta chat! oh ohnn ohnn ons mmm mew mmmh mew mew kiss kiss kiss." And that woman was like oh shit I am a cat. And he was like, "you may call me street car because of my desire for you." Yea....

you goddamn right ivan, better shake hands in motherf¤#king france OR you can forget about your arse. what the f¤#k kind of qualifications are those, she follows sharia in a non muslim country. this dumbass is some kind of dumbass.

You have to draw the line somewhere
D

Religion is a personal choice for an adult (in the western world.)

Visas are not personal choice.

I bet she didn´t refuse but politely decline.

Shame she wasn´t jewish, that would have been interesting.

The practice of the traditional Jew is different. The rule is that people of the opposite gender do not even touch each other, let alone shake hands, unless they are husband and wife, siblings, or children with parents and grandparents.
Click to expand...

Location
Somewhere over the flyover