We are pleased to announce a very special event at Central London's favourite warehouse venue, Ewer Street Car Park, SE1. On Friday January 28th 2011, Spectrum celebrates a "Decade of Dropping Beats" with a line up worthy of a brand who's events across UK and Europe have seen them become the market leader for multi-genre club events.

Headlining on the decks is without a doubt the biggest act in electronic music at this time, Pendulum. Hot off the back of their sell-out UK arena tour, the Antipodean uber-band lead a hot as hell line up that showcases the diversity of current dance music, and is guaranteed to rock the industrial warehouse space to its core.

None of which are currently hotter than Skrillex from Los Angeles, who plays his first ever European show. His debut album Scary Monsters & Nice Spirits on Deadmau5's Mau5trap imprint has been a huge record in 2010, and even saw Skrillex occupying and unprecedented 8 out of 10 spots in the Beatport Overall Top 10.

Double Brit Award winner Ms. Dynamite is no stranger to success and is destined for more with her forthcoming single with Katy B, hot in the footsteps of her massive hits with Magnetic Man, Redlight and DJ Zinc. Her live performances are well known for their explosive nature, and will surely be a highlight of the event.

Following down the theme of bass orientated yet diverse music we welcome a quartet of the most upwardly mobile acts around at the moment. Doorly has taken the UK, US and Ibiza by storm with his technically superb and energy packed DJ shows and recently completed his first Radio 1 Essential Mix. One of the biggest act in dubstep, Joker, seemingly can't stop turning everything he remixes to gold. Also on the half-time tip we are pleased to welcome Modestep who are undoubtedly in the verge of something rather special. The London based four piece act, expected by many to be 2011's breakthrough act, have created a huge online presence and their live show is highly rated.Tim Healey’s recent releases have seen the Brighton producer's music become standard issue in many of the A-list DJs sets, a massively busy international touring schedule and his latest release LIV IT LOV IT signed to SONY.

16 Bit, Delta Heavy and Union also star, joining Spectrum's founder Pete Jordan for a spectacle of boundary-less electronic music. Pete started the Spectrum brand to advance his own DJ career in February 2001. Starting in Nottingham, the night would become a regular event at clubs such as the Bomb and Stealth, before setting it's sights much further afield. Firstly it conquered Birmingham at venues like Custard Factory, Air, Rainbow, Q Club and now appears regularly at the HMV Institute where it regularly attracts crowd upwards of 2000 people. Spectrum also resided at the soon to be re-opened Matter in London, and has hosted an arena at Global Gathering for the last three summers. Over last the decade, Spectrum has held events in 10 different countries throughout Europe and over 20 different UK cities, and continues to attract large audiences at its well-loved shows.

Regarding the forthcoming London show Pete Jordan said, "I'm really pleased to be able to bring Spectrum back to London and to undoubtedly one of the best event spaces in the capital at the moment. Previous shows with the likes of Drumcode, Delphic and Pryda have been amazing, and I know that with the massive line up on January 28th is going to be huge!"

On Spectrum reaching 10 years and still going strong, "it's certainly flown by, and despite intending it starting as a small party to DJ at, it's kind of grew into a monster. It's great to see that the events are more popular than ever and our original concept of cleverly programmed line ups that avoiding genre pigeon holes seems to be even more relevant than ever. 2011 is going to see the brand expand further than ever before, we have a number of huge projects almost ready for announcing. We will also return regularly to London, and will be popping up in the places across the globe yet to experience exactly what Spectrum is all about."

Massive response to this straight from kick off! We are down to our last 20 early birds and these will will sell out in the next 24hours and price goes up to £15 so bag yourself a festive bargain!

Here is a mini mix from Pendulum and Live footage of Skrillex in action! 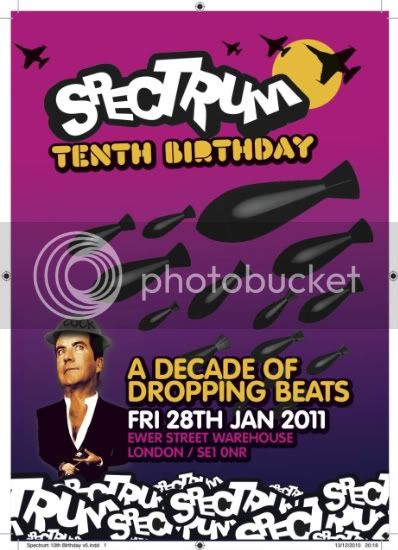 Response to this event has been nothing short of spectacular, all our early bird tickets have sold out and we have limited £15 tickets on sale leading up to the Xmas and the NY, standard tickets are priced at £17.50.

As the dust settle’s on 2010 the first great dnb and dubstep event of 2011 is coming straight at you. Spectrum celebrates 10yrs at the top with a MASSIVE warehouse party at the now legendary Ewer Street Warehouse. Pendulum headline with a very special DJ set, Skrillex makes his hotly anticipated UK debut and a whole host of special guests including Miss Dynamite, Joker, Doorly and much more..make this a unmissable start to 2011.

Check out this mini – mix from Joker to get you in the mood..
http://www.youtube.com/watch?v=ztCKt6zfCgM