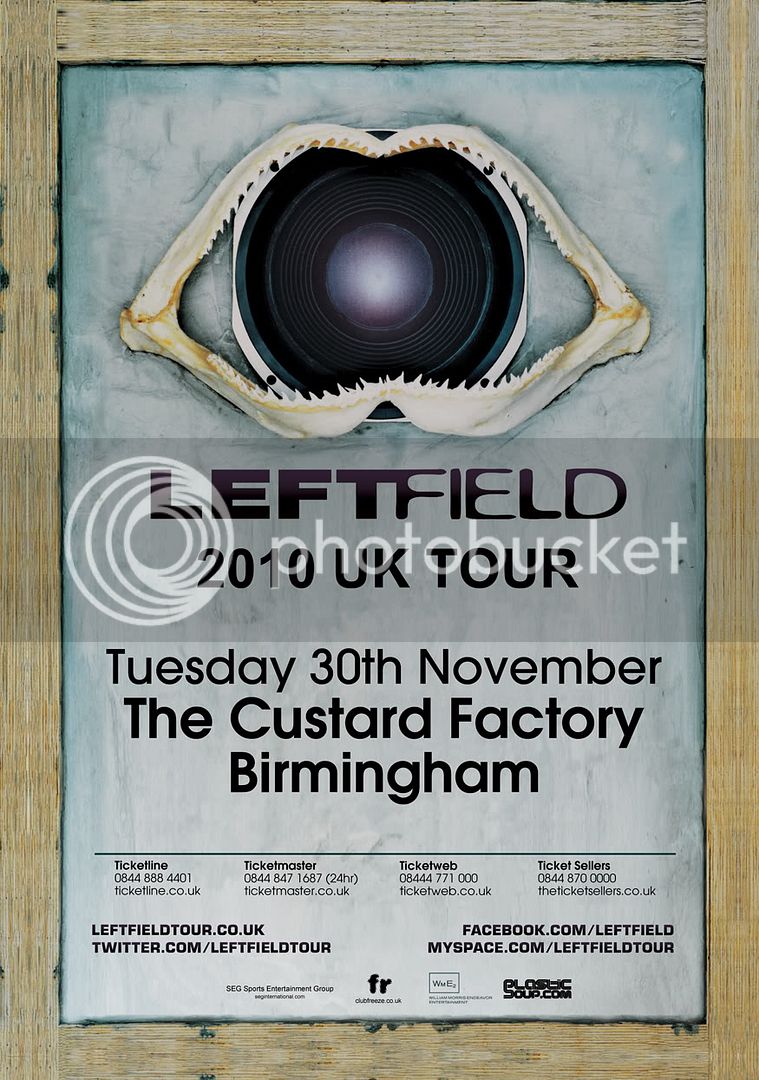 Leftfield have announced their biggest UK Tour in over a decade. After a series of stunning headline performances at some of this year’s hottest festivals including Rockness, Benicassim, L.E.D and Creamfields, Neil Barnes returns with a new live show set to reverberate the length of the UK this autumn. Barnes will be joined by original vocalists Djum Djum, Earl 16 and Cheshire Cat for a tour that will demonstrate once again why Leftfield Live remains one of the must-see music experiences on the planet.

The tour kicks off on Thursday 18th November and will see Leftfield perform across England and Scotland. On Tuesday 30th November the band will play a very special show in Birmingham at Space 2 Warehouse Custard Factory, the venues low ceilings providing the perfect backdrop for an intimate reunion with the West Midlands.

Leftfield’ Neil Barnes comments: “The reception we received over the summer at the festivals was amazing. Now we can't wait to get out there again this autumn and bring the full Leftfield Live experience to the rest of the country. Let the bass roar.”

Leftfield trailblazed their unique sound in the early ‘90s, allaying rave with the power of rock music and taking John Lydon back to the top of the charts in the process. The band’s debut ‘Leftism’ became a modern classic, heralded as one of the greatest albums of all time by Q Magazine. Sophomore effort ‘Rhythm & Stealth’ went to number 1, spawning the techno anthem ‘Phat Planet’ which soundtracked that Guinness advert with the horses.

Revealed as the loudest band EVER to play Brixton Academy, Leftfield’s show made such a seismic impact that it remains the benchmark for live electronic music to this day. They can can take recognition for inspiring some of the world’s biggest dance acts, including Daft Punk, Basement Jaxx, Chemical Brothers and Underworld, and the original superstar DJ Sasha, who acclaims Leftfield as “writing the commandments on electronic music”. Now Leftfield are back…

This is set to be one of the biggest, loudest, and most emotional tours of the year, taking dance music back to its roots with one of electronic music’s true originals. The Birmingham leg gives the West Midlands opportunity to feel the intensity of these icons of electronica in their true glory, back to their vitriolic best..


Tickets go on sale 9am Tuesday 12th October and are available by clicking this link https://www.theticketsellers.co.uk/buy_tickets/events/?id=10013306

Following the recent announcement that Leftfield are to tour the UK after a successful summer spent playing Festivals across Europe, Neil Barnes has confirmed who will be joining him in front of the legendary Leftfield sound system. Original vocalists Djum Djum, Earl 16 and Cheshire Cat, all of whom played key roles in Leftfield's classic albums 'Leftism' and 'Rhythm & Stealth', will be joining Neil for the shows. Completing the live line up will be Adam Wren (keyboards), Jess Mills (vocals) and Sebastian Beresford on drums,

Leading the dance music charge of the early '90s, Leftfield carved a path for a raft of great artists including Underworld, The Chemical Brothers, Basement Jaxx and Daft Punk. Their pioneering debut album 'Leftism' often tops 'Best Dance Album' polls, whilst their live shows are the stuff of legend. Leftfield's live return is an opportunity for everyone to experience one of this country's most influential dance artists.

Neil Barnes says: "The opportunity to perform the songs to a whole new audience with the original sound system and vocalists is an opportunity that I simply couldn't turn down, The good will surrounding the live show has overwhelmed me, the expectation is tremendous. I simply can't wait to blow everybody away, Literally."

Paul Daley comments: "I'm about to embark on a solo career with the release of my first solo album. I also want to continue concentrating on my DJ'ing work, so I've decided I won't be joining Neil on stage for the Leftfield dates this year. I want to thank all the fans for their past support and all the people who will be hearing and seeing the band for the first time."