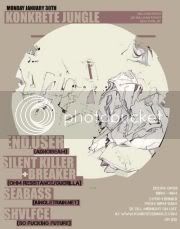 Lynn Standafer, better known as Enduser, undoubtedly counts as the better known, most active and highest praised break- core producers. Shooting his way through the 2000’s with sal- voes of EPs and albums as well as constantly touring all over the world, Enduser has grown from being a driving force of this sound to one of its best embodiment and most recognized figure.

Synonymous for a music which marries carefully laid melo- dies with unrestrained aggression, Enduser has received prais- es from all sorts of horizons for the way he manages to entice a sense of beauty in the midst of broken and pummelling beats. If hard electronic music can ever be recognized as having a soul, it is throughout Enduser’s output that this gets best demonstrated.

Enduser has played too many high-profile shows and festivals to list, and has amassed an impressive discography, which features several highly successful records and tracks. His music has been recognized as heavily influential in many genres, ranging from drum’n’bass to metal.

Enduser has also collaborated with artists ranging from drum’n’bass heavyweights Dylan or DJ Hidden as with rock and metal legends Jar- boe (of the Swans), Justin Broadrick (Godflesh, Jesu) or Bill Laswell.

Established New York based visual artist/photographer, SHVLFCE's DJ sets hide in the crushing, mechanised depths of Techstep and Drum and Bass. 2011 was a massive year for this selector with the unveiling of the mighty "So Fucking Future". Full force ahead, SHVLFCE looks to leave a timeless imprint on the creative community at large.
Facebook.com/SHVLFCE
SHVLFCE.com


Visuals by ECHOVISION
Sound by LIFELINE!