For many of us, Survival needs no introduction. Releases on pioneering labels Inperspective Records and DJ Baileys Intasound, Creative Source, DNAudio, Quarantine, Play Music and Shogun Audio, as well as the name behind tunes like Storm Chaser ft. Alex Perez, Cronk ft. Break and his self titled SURVIVAL LP on Exit Recordings.

With a string new release on labels such as Play:Musik, Utopia Music and Break’s new album on Symmetry Recordings. Survival’s deep, organic sound has rapidly earned him a reputation as one of the true craftsmen of modern drum & bass.

Many thanks to SURVIVAL for this excellent selection for KONGKAST – Asia’s drum n bass and dubstep podcast.


//Kongkretebass KONGKAST Page now on Facebook!
With regular updates on upcoming mixes by Regional and International Artists and Music news and MORE! - Sign up and keep your self informed! 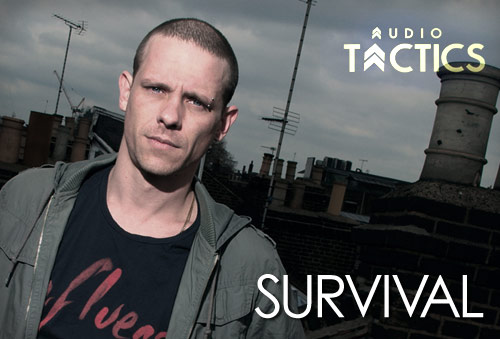 Having been a familiar name in many of Drum n Bass’s top flight DJs tracklistings recently, you could be forgiven for thinking that Survival is a new artist. This is most certainly not the case.

In fact Steve Kielty has been involved in both producing and engineering since the inception of Drum n Bass back in 1993/94 when he kicked off his musical career as a studio engineer at Basement Studios in Watford. Around this time he paired up with Roy McCabe under the guises of Akustic Research/Banaczech and released tunes on two very prolific labels of their time, Vinyl Addiction and Partisan Recordings between 1995 and 2003.

From there he took a short break from producing and worked as a Studio Manger for West Row studios until 2005 when he re-emerged as a solo artist under the alias Survival.

Releases on pioneering labels Inperspective Records and DJ Baileys Intasound sent out a clear message that Survival is an artist to be taken very seriously, a distinctive style and studio skills earned from years working in pro studios, he has, in the last few years created a high demand for his music and also his DJing.

With a recent plethora of well received releases on labels including Creative Source, Exit Records, DNAudio, Quarantine, Play Music and Shogun Audio, Survival’s deep, organic sound has rapidly earned him a reputation as one of the true craftsmen of modern drum & bass.

Collaborations with Break, Silent Witness, D-Bridge, Fierce, Sabre and Zero Tolerance clearly illustrate the respect he commands from his peers, and with his newly launched Audio Tactics label providing a focused outlet for his productions, his fan base is expanding as rapidly as his discography.

Nice one! CHeers
I