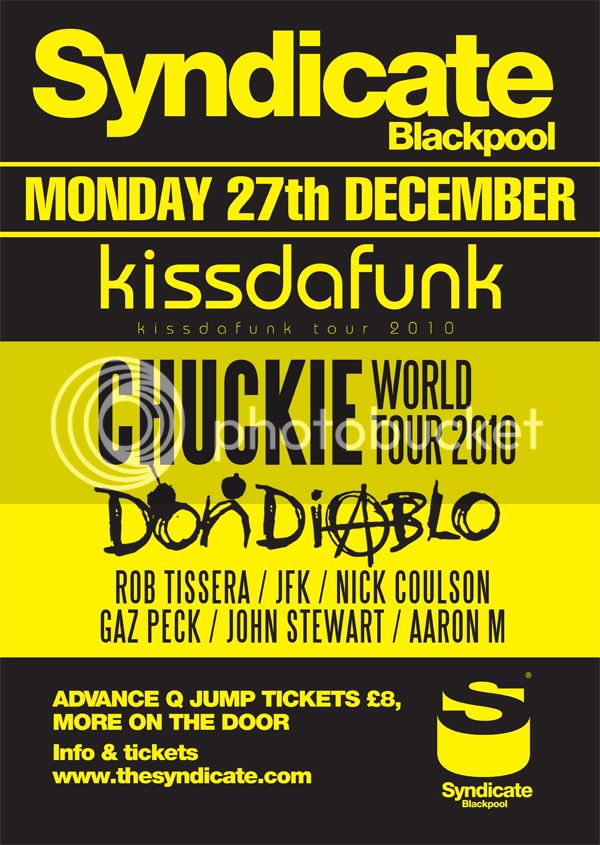 Join us in Celebrating 8 years at Britain’s Biggest Club
After 8 years as one of the country’s most renowned dance venues you would think we would be getting tired of bringing you the biggest names in clubland...... HELL NO!!!!!!!

WE DONT NEED AN EXCUSE FOR A PARTY!
Celebrate our 8th birthday in style this year with some more 1st’s for Blackpool.

The Dirty Dutch house sound has dominated nearly all of 2010 and we decided to bring you two of the pioneers of that amazing Dutch sound.

Chuckie grew up in Suriname and was influenced by the large number of musical genres of the country. When one of his friends started working as a DJ, his interest for DJing started at the age of thirteen when he started experimenting with remixing at home. Gradually, he built his own record collection. At first, he played at parties of his friends and family.
In 1993, he started working as a DJ in club Coltage in the Hague. Nowadays, he performs regularly around the world. Chuckie has produced and remixed for many other artists David Guetta and Afrojack.
In 2008, he performed as the opening act at the dance event Sensation. Afterwards, he stated that this was a dream come true for him: he had visited the very first Sensation event in 2000 and promised himself that one day he would be standing behind the DJ table.
In 2009/2010 is huge hit ‘Let the bass kick in Miami’ transported him to superstardom and he is now headlining our 8th Birthday celebrations.

After signing his first record deal at age fifteen, Don Diablo has had the opportunity to grow as a producer as well as an artist. His music is a refreshing blend of musical styles; rock, electro, and hip hop are the main ingredients. In 2004 Don Diablo released his first album through Universal music which spawned two chart hits, both accompanied by futuristic videos.

2007 saw Don Diablo doing over 250 sold-out shows as a performing artist. His hectic tour schedule has taken him from London to Tokyo and from Miami to Sydney Furthermore, Don Diablo proved to be hot in more ways than one in 2007: one of his music videos got nominated for an TMF Award in the category "Best Music Video 2007" he was voted "Best Dressed Man of the Year" by Esquire Magazine, while also being named "Most Popular Dutch DJ" at the GKA Awards.

Rob is known in the industry as ‘Mr Nice’, his charming and lovable manner and infectious smile have made him a dream to book for promoters and a pleasure to play alongside as a DJ. Although starting off in the harder scale of the musical genre he now has firmly established himself as a highly capable house dj but always has that edge to make sure he gets you off your seat to dance. His Kiss Da Funk brand is highly respected in club land and we welcome them both back to help celebrate our birthday in style.

Along with our very own superstar resident JFK and our local heroes Nick Coulson, Gaz Peck, John Stewart and Aaron Morris this birthday party will be one of the best ever!

Advance tickets can be purchased direct from our website www.thesyndicate.com

Advance tickets with Q-Jump available from the Syndicate offices or you can Buy them online here: https://thesyndicateblackpool.clubticks.com.

THE SYNDICATE THE UK's BIGGEST CLUB IS LOOKING FOR COACH PARTY ORGANISERS.
WE HAVE THE COMPANIES READY TO PROVIDE THE COACHES FROM ALL OVER THE NORTH,NORTH WEST AND MIDLANDS.
WE NEED THE PARTY ORGANISERS TO SELL TICKETS ON OUR BEHALF TO FILL THE SEATS.