Cerberus (Wouter Schrijvershof) has only been into drum & bass for the last 5 years. After visiting one of the Structure parties that were hosted by the Utreg Massive Crew in 2003, his heart was sold to this music. His journey as a DJ starting in the summer of 2005. Although he started with techno, drum & bass soon took over and till this day dominate his decks. Somewhere in 2006 he visited a Bassbin label night hosted by the Ichione crew. This night opened his ears to a deeper side of drum & bass which he instantly loved. In december 2007 he was granted his own jungletrain.net show called Sub Woofing. After a few months a co-host in the form of The Watcher was added. This mix reflects all the elements that the Sub Woofing show has to offer. For more info check out: www.myspace.com/cerberusdnb or email at cerberus@jungletrain.net.
A special shout out goes to the ones like Phuture-T, June Miller and Madcap for sharing their music for this mix. 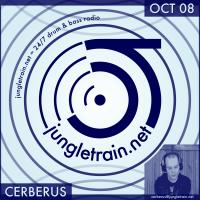