Time flies when you're having fun.

It's been 7.5 years since I started the drum & bass internet radio that became jungletrain.net. Back then, drum & bass was probably at its peak in uniformity, with most tracks being two-step and/or amen based. In the years that followed, drum & bass has kept reinventing itself and has become more diverse than ever. New styles developed when unknown artists entered the scene with fresh ideas. Especially the last couple of years we've seen some very exciting changes in the drum & bass musical landscape.

In these same 7.5 years, my own taste has shifted from the hard, dark, raw to the moody, mystical, subtle. There is a lot of great talent out there bringing this sound in different ways. This mix gives a small taste of what keeps me excited about drum & bass music today. I hope you will enjoy it.

Shouts to all listeners, DJs and crew at jungletrain.net. Much respect to the producers keeping drum & bass alive and kicking. 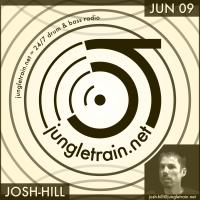 DONATE
Due to the station's non-profit and volunteer-based nature, jungletrain.net relies on donations to survive. Donations are needed to cover monthly server park hosting costs, copyright payments and growing bandwidth costs. DONATE HERE if you want to help.