After the resounding success of Mr. Freud/ Red Sky topping the drum and bass arena chart for a month, and hanging around in the beatport dnb top 10 for just as long, super producer & DJ John B is ready to give you another taster from his new album in the workings TRN ME ON.

Continuing to push his personal and stylistic boundaries, When the Time Comes and Dancing in the Dark blaze into a new more mature direction for the maverick. This is music made for centre stage arenas; and the definitive thinking mans drum and bass.

When the Time Comes starts out as a simple idea, exceptionally executed. It subtly builds bubbling analogue arpeggios contrasting with the crisp phuture-808 drums. It is beautifully crafted drum and bass, inspired into a new direction, melting with progressive house influences & electro trance. Characteristically evading categorisation, John B once again raises the bar for dnb production, taking on the genre and resetting it with a tune that seeps with the style of Eric Prydz, Deep Dish and Deadmau5. It has already defined and loaded the atmosphere at Johns high profile gigs such as Ultra, The WMC & The Starscape Festival in the USA & Pirate Station events in Russia. Quite simply this is both John B at his best, and how youve never seen him before.

In Dancing in the Dark John B takes a characteristic flip and wires into a harder, heavier sound. Mashing distorted beats and siren sounds this tune thrashes out some seriously gritty dance floor friendly drum and bass. Well we say friendly, but this is a nasty cut up dnb anthem; with distorted vox that smacks of Boys Noize, Justice et al. So dont let the trancey epic intro/break fool you, this tune will drop with head smashing consequences. Its a real crowd pleaser, thats proud to be angry...

Big Shot Magazine Review
John B - When The Time Comes / Dancing In The Dark / Numbers
4/5
D&B's own '80s pop star is back, and he's more electro than ever. Slipping a selection of influences into a cracking set of tracks here, Monsieur B keeps you guessing at every turn. 'When The Time Comes' rocks out with some arpeggiated goodness and electro-esque drums before melding itself with progressive house and trance to create a twisting monster of a tune. 'Dancing In The Dark' takes things to the next level with a dirtier and altogether heavier sound, but still retaining that aloof electro attitude. Finally 'Numbers' completes the package, although this one will only be available as a Beatport exclusive. Skipping drum patterns and interspersed bass cuts mingle nicely, rubbing shoulders with more of that progressive outlook. Nice work John.

Dogsonacid.com Review
Simply put, John B has the electrostep on lock. 'When The Time Comes' starts out simple enough, with an ascending melody bubbling to a boil, but instead of the normal boisterous funk that John has been known to drop as of late, this tune tops into a calm workout, never getting too crazy, yet still keeping you deep within the groove. Sounds like the perfect track that skillful DJs can work into some fabulous blends! For those who are looking for something to blast while playing arcade games, 'Dancing In The Dark' is just what the doctor ordered. Once that 'dancing in the dark' sample comes in, this one is going nowhere but into the gutter, and emerges as a DnB anthem that's both sick and thick. John B definitely has an array of sounds in his sampler, and knows how to work varying vibes into his sound. And for those who are copping this track on MP3, Beatport has an exclusive track, the melodic-synth rinser 'Numbers', that you can grab as well.

John B will be a guest on BBC Radio 1 on the In New DJs We Trust show with Nerm & D-Code on Friday August 15th, 2-4am (Saturday morning). We're told he'll be doing a b2b mix with Dubstep superstar DJ Skream, and being interviewed by the guys... Nice one! 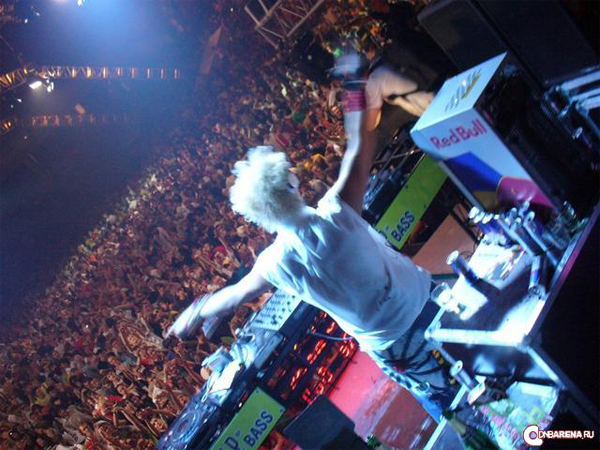 The John B August 2008 Studio mix is up and available to download free as part of the John B Podcast. Go to http://podcast.john-b.com to grab it!

John B's behind the scenes tour videos & video podcasts continue to robotify the internet. The latest video from his headlining gig at the Felsziget Festival in Romania 2 weeks ago is one of the best - and features the premier appearance of the mighty SIDEBOOB!

It's up on youtube http://www.youtube.com/watch?v=D1VyIwdFwLc and also in the http://podcast.john-b.com podcast feed Enjoy!

If you hadn't already noticed, we've massively revamped the John B blog & podcast with new layouts and features. His myspace is monstrous as usual, and the first port of call to check out where he'll be playing live over the coming months.<br><br>