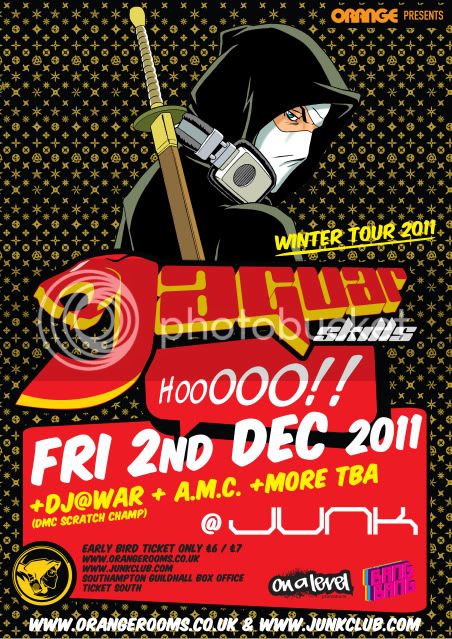 Get ready for Jaguar Skills as makes his Junk debut! OK, So it's not his first time in Southampton but this will certainly be his loudest adventure yet as he is let loose on Junk's legendary sound-system for a night of epic proportions. As if it wasn't enough having the superstar ninja from BBC Radio One at 55 London Road, Jag has brought some friends along for the ride too. Joining Jag will be DJ@War and A.M.C., who have both acquired their own armies of loyal fans due to their remarkable talent on the 1s and 2s! Get your tickets quick, this one WILL SELL OUT IN ADVANCE!

Honing his craft and love of music for the last 15 years, the rise of Jaguar Skills as the greatest mash up DJ on the planet has been well documented. Cementing regular slots on Radio One and becoming a regular fixture at "Toolroom Knights", Jags skillful, lightning speed mixing has captivated crowds and won over countless fans. Delivering an aural assault with every set, Jag wrestles with every tempo and style; from House to Drum & Bass, Hip Hop to Dub - Jag smashes everywhere he plays, which just this year has included Space (Ibiza), Isle of Wight, L.E.D presents Deadmau5, Escape In The Park, and Global Gathering Ukraine!

DJ@War has been tearing it up over the past year with gigs coming out of his ears, his mash-up style is going to set the Old Firestation on fire, you may have seen him at one of this summer's festival or heard one of his insane collaborations with Jag himself. OOOoooof!!