INFECTIOUS BREAKS move to Drift Bar for April and we bring you 3 very special guests!

Headlining this very special night, fresh from djing at The Breakspoll Awards and warming up for their slot at Glade 2009 are

Afghan Headspin was born in 2006, Wrisk & Mackie from Resonant Evil, forged a new identity to take forward their musical visions! Releasing on some of the dance music scenes biggest labels, including Broke, Westway, Bombtraxx,Downbeat and APE, and also DJ'in week in week out all over the World, as well as managing an up and coming breaks label Standard Audio
The last few months have been crazy, the highlight being a mental set @ Breakspoll / Fabric, couldn't have gone better! Because the Bookings have been coming in thick and fast since that gig, so keep em peeled! Most note worthy being GLADE 2009 & Paradise Festival (Spain), but also trips to Jersey, Bristol & Birmingham have been confirmed.

Release wise they have some forthcoming remixes on APE & Rocstar, and many more in the pipeline, including some for dub nut JINX! and a really special one for 601. You can grab a listen at AFGHAN HEADSPIN.com

Don't forget to look out for their latest release on Bassrock, "Bad Selection", out now on Vinyl, due out early April on Download.

Loads more remixes in the pipeline, and their threatening to start the album any day now too!

An indie kid who grew up through the drum & bass, bigbeat and garage explosions of the nineties before getting turned on to the sounds of nuskool breakbeat, ollspin (aka Spollin) has been DJing and promoting since 1999. He has been pushing the breaks sound to ravers and party people across the South Coast and South West of England for 10 years.

Playing the full spectrum of breakbeat based music - taking in dubwize, oldskool, garage, and drum&bass influences - ollspin is a proud supporter of the local scene. Residencies across the South and guest sets at well respected nights all over the UK, plus regular radio shows on stations such as Brap FM, Breaks FM and NSB Radio have been the perfect opportunity to showcase his sound.

Ollspin was also the main man behind Southampton’s legendary Influenza breakbeat parties (the city’s longest running and most successful breakbeat night), currently promotes the Frustrated Disco Machine and Void vs Brap parties in Bristol, is the founder of online dance music community outofthevoid.co.uk, and is involved with the Manitou free party collective.

Reverb & Custard are Laurence Scott aka Mode X, Rob Brading aka Rob Watts and Paul Shepard aka the Funkymonk. The trio feast daily on a healthy diet of breaks, organic nu skool ,of course. not forgetting the custard. Not Rob. hes allergic. thanks to the fawcett inn, southside, they were able to take their breaks buffet to the pub. so if your party requires a nu skool buffet, and if no one else can help maybe you can hire reverb & custard.


As well as the guests, The residents will be providing the sonic onslaught of bleepy freak-funk for the feelgood electro heads! They are MIKE CUBIST and his futuristic take of chemically enhanced distorted mayhem, the splurging bass splutter of IGNITION + PROMO and the slinky beats and sensual Broken tech-funk of LEE + MARK MARTIN. Vocals are provided with the distinctive reggae leanings of SIDEKICK MC.


BRING I.D OR RUN THE RISK OF NO ENTRY - R.O.A.R - DRESS CASUAL AND COMFORTABLE 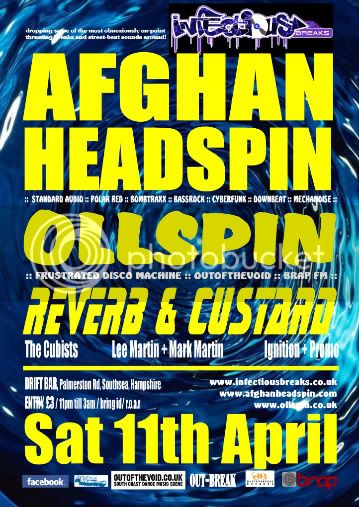