INFECTIOUS BREAKS return to the DRIFT BAR on FRIDAY 5th JUNE with plenty of futuristic robotics to satisfy any discerning beatfreaks needs. Cutting up the sleazy electro funk nuskool stylings with belching basslines and throbbing rhythms is the artist behind one of the freshest labels on the scene UP:START MUSIC, the Breakspoll nominated d*Funk.

Doug Masters, aka d*Funk, love for playing music started at a young age, getting his first decks at just 15 and playing his first live gig at the age of 16 sparking an inspirational fuse that is still burning brighter than ever some 12 years later. The Bournemouth club night Break Da House was born in July 2004 with Doug steering the night from both behind & in front of the decks and has established itself as one of the biggest breaks, electro & eclectic beats nights featuring acts such as the Stanton Warriors, Plump DJs, The Freestylers and Krafty Kutz. Doug's debut EP 'ElectroTek / Transition' was released on Westway Records in Jan 2007 and went on to be no 2 in the Kiss FM breaks chart, rated 4/5 by DJ Mag, feature on a TV advert & on Westway’s first mix compilation ‘Westway To The World’, which itself has been rated ‘Best Mix compilation’ Dec 2007 by both DJ Mag & the highly respected DMC. After further releases on Nitrous, remixes on Westway and the massive remix of Paul Lyman's Breakthrough on Dusted Breaks, Doug has launched his own label UP:START MUSIC. Born out of the frustration of the state of the current breakbeat scene & the music industry in general with no one will to take a risk on new artists, Up:Start Music will focus on breakbeat lead music, ranging from down-tempo funk break-beat to tear out breaks with also some electro & jackin' beats thrown in as well. The first release, Bust This, has been getting rave reviews across the board and has managed to get the Up:Start policy across making d*Funk and Up:Start Music ones to watch this year.

Audio Corruption began his epic journey into sound and electronic dance music in 1994, influenced by the early sounds of hardcore, jungle and drum and bass before discovering Nuskool Breaks and never looking back. Developing his electronica sounds as he grew Audio Corruption has become an established DJ and his most recent mixtape blew the Infectious crew away and he fully deserves his chance behind our decks to showcase his downright dirty breakbeat offerings.

Ben Wilcox is one of the most popular DJs on the Portsmouth scene. Whether he's playing under the aliases of either Headrush for hardcore or Jamos for drum and bass Ben's sets are grizzled, dirty and a diet of dancefloor devastation. Not restricted to playing just those two styles Ben regularly plays at venues across the city hard dance, trance, funky breaks and house and is one of driving forces behind nights such as HardCore Raver and Dark. Its a pleasure to have Ben play Infectious with his catchy, razor sharp discoid beats.

The residents providing the sonic onslaught of bleepy freak-funk for the feelgood electro heads are MIKE CUBIST and his futuristic take of chemically enhanced distorted mayhem, the bootlicious bounce of IGNITION, the splurging bass splutter of PROMO and the slinky beats and sensual broken tech-funk of LEE + MARK MARTIN. Vocals, as always, are provided with the distinctive reggae leanings of SIDEKICK MC. 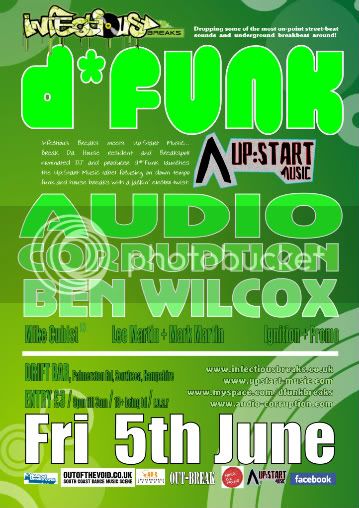