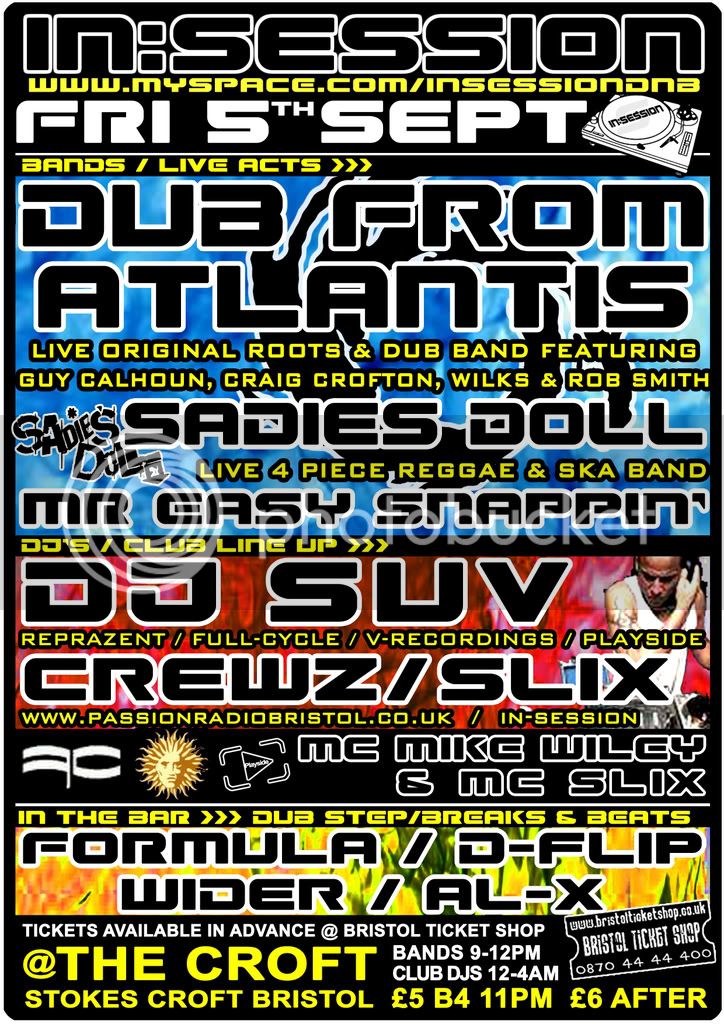 IN:SESSION ARE PROUD TO PRESENT

Dub From Atlantis have been playing and promoting all styles of reggae music in Bristol since the summer of 2000. Founded by Stevie Bear & Guy Calhoun of the 'Men From Atlantis' they have performed with most Bristol's best known reggae artists as well as newcomers to the scene & big names from out of town.

Having started as a relatively low key affair at Bristol's beloved nightspot 'Cosies', Dub From Atlantis could be said to have grown into a 'monster' of all things reggae & dub! Over the years they have played at most of Bristol's favorite venues and now with a ten-piece band well established the DFA fold looks to be going from strength to strength.

Sadies Doll's 4 piece line up of Dan (guitar & backing vocals), Lew (drums), Jack (lead vocals & rhythm guitar) & Bob (bass) hails from the South West city of Bristol & have been playing gigs, parties & other events for about 6 years all around the UK. Though their laid back beach bum reggae/ska vibe has often been favourably compared to US legends Sublime, the band actually deliver a richly diverse sound that also features frantic 3rd wave ska/punk leanings in the mould of Ednas Goldfish & radio friendly white reggae/pop catchiness along the lines of The Police.

Sadies Doll released a 4 song CD EP on Crucial Records in 2004, which brought them to the attention of Moon SKA Europe Records. They headed out across the UK alongside Chris Murray, Zen Baseballbat & Catch It Kebabs on the Moon Records' Summer Of Ska Tour & recorded their debut album for Moon in 2005. However shortly after this their deal with the label fell through. On the brink of splitting up Sadies Doll sent a copy of the CD to Do The Dog Music who immediately agreed to sign the band. The 16 song self titled album was released by Do The Dog Music in August 2006.

In-Session resident and a dj with a collection to be reckoned with! ..Mr Easy Snappin is known in Bristol as the authority on 60's Jamaican music. Expect killer tunes, some you will know and some you definately will not, but always the right combination of tunes to cater for any crowd..this is not to be missed. !!

As a crucial member of the respected Full Cycle and Reprazent stables, Suv has undoubtedly contributed his fair share to the development of Drum n Bass and definitely to the sound of Bristol. A member of the seminal 1989 group Fresh Four who burst onto the scene with 'Wishing On A Star', Suv has continued to carve a musical journey both as a solo producer and part of larger conglomerates with Roni Size, Krust and Die always with the intent to break new ground. Having listened to everything from Bob Marley to David Bowie growing up in the UK, Suv brings a truly urbane, open-minded sense to his musical productions.
Never afraid to look into the past and routes seldom explored, Suv's Desert Rose EP kicked up a storm with its release. Borrowing influences from Latin, Brazilian, Hindu and Moroccan grooves, the EP was caned by everyone from the likes of Grooverider and Fabio to eclectic leftfield DJs like Gilles Peterson and John Peel, proving that good Drum n Bass can appeal to both the serious headz as well as anyone who appreciates good music. Mixing up these Asian and Flamenco-inspired themes with his trademark Bristol dubby sounds has definitely given Suv a new dimension - one that saw him follow up the EP with Follow The Sun. Like its precursor, the EP delves into uncharted territory in terms of fresh rhythms.
On a more dancefloor-orientated front, Suv has been churning out a number of tracks that as always have made people sit up and pay attention. His single, Do You Remember Me, a release employing the vocal talents of New Zealand's MC Tali, has been causing some serious damage on dance floors worldwide up to this very day. When Suv's got time from his V Recording, Fullcycle, & Reprazent duties, he has his own label to work on called Playside. Playside releases represent the signature Suv sound that you'll hear in his DJ sets - these are tracks that may not fit the Fullcycle or V Recordings mould. As Suv as a DJ plays like no other DJ, his open mindedness and willingness to open peoples minds and play a wider range of music has made him the DJ producer he is today.
Suv has a few diferent projects on the move at the mo, one of them being Rhythm and Bass, or R'n'Bass as he calls it. Suv met Don-e, an RnB artist and formed a brand new sound mixing the RnB styles of Don-e with Suv's Drum n Bass to form Rhythm n Bass. They're currently working on an album called Rhythm n Bass to show the nation once again that Drum n Bass can be musical yet still hard. Suv once more finds that equilibrium between hard dance floor beats and music for the soul...
Also available is this years summer hit SKY on Sidechain-Music. Check out www.djsuv.net to buy SUVMUSIC go to www.digital-tunes.net www.beaport.com ITunes etc

Bristol legend and I:S resident Crewz has been actively playing in and around Bristol for over 10 years.....and with his weekly radio show on www.passionradiobristol.com (every weds 7-9pm) he is sure to bring the freshest dubs and wickedest vibes!!

I:S founder Slix has also been in the Bristol scene for over 10 years and is going to playing a dj set in the main room and providing mc support for Mike Wilely. Slix has worked with Suv on numerous occasions and is looking forward to representing alongside him again at another In-Session