BACKED UP BY SUBZONES' MC ALPHA AND IN:SESSION MAIN MAN MC/DJ SLIX...THIS PROMISES TO BE A BIG NIGHT FOR BATH,,,,

WILL BE ORGANIZING A COACH BACK FROM THE VENUE, SO LET ME KNOW IF YOU ARE INTERESTED AND I WILL CONFIRM TICKET PRICES INCLUSIVE OF COACH TRAVEL!.....HOPE TO SEE YOU THERE 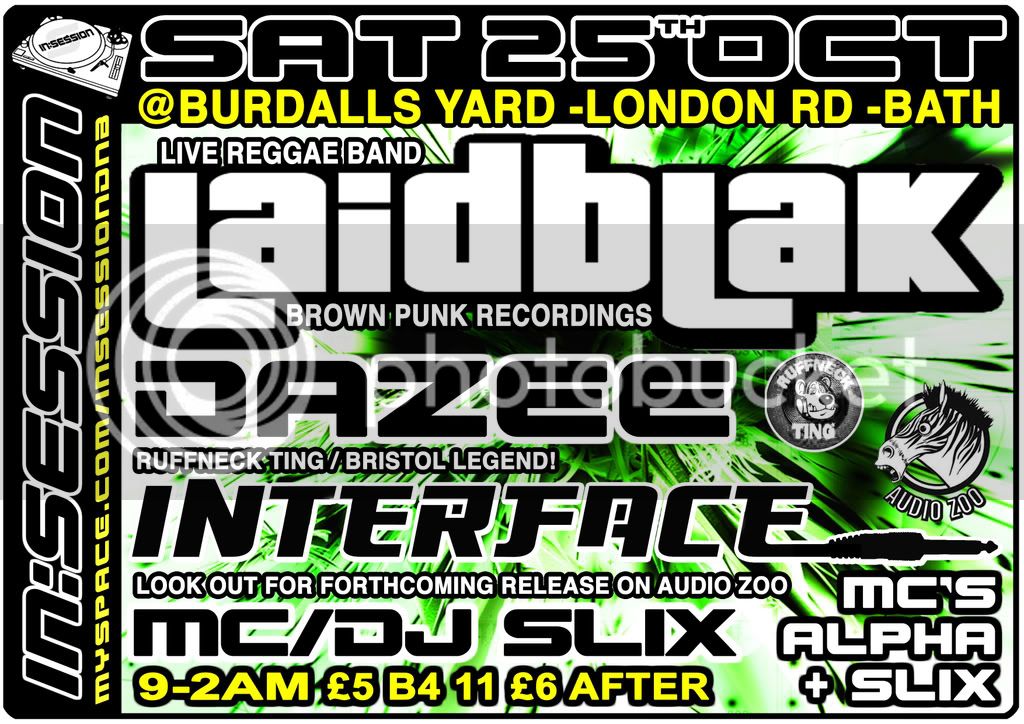 Urban reggae heavyweights Laid Blak have now been signed to a brand new label set up by Tricky and Island records founder Chris Blackwell. The Laid Blak crew are feelin very positive right about now and it looks like big tings are set to happen!

Laid Blak's first single "Red" is out now on iTunes and Napster... the second single is on its way soon.. and the album will be released later this year. You can now also join the Laid Blak facebook page and keep up with the latest label and gig news, and you can upload your own photos and videos of the band

Coming to the scene in the days of free parties and warehouse raves, Dazee has been flying the flag of jungle music since it began.' Jungle', 'drum and bass', 'dnb', whatever you call it now ... she's still flying that flag! Dazee began her professional DJing career in 1992 and a year later founded the now legendary Ruffneck Ting alongside Markee (Kosheen) and Rachel and Colin (Knowledge magazine). When Ruffneck Ting started a record label in 1995, Dazee exercised her production skills both as a solo artist and with Markee, as Substance, releasing dance floor smashes such as 'Damn Right' and 'Prisoner'. Her exceptional ability took her to every party that mattered – Universe, Dreamscape, Helter Skelter and World Dance. Soon she was juggling a busy international schedule playing gigs from Sweden to San Fransisco and nearly everywhere in between. But the road to success wasn't easy as she explains: “Back in the day I was on a mission, dnb had to be heard, I had a campaign I was practically a jungle Jehovah's witness!” Dazee also took her crusade to the airwaves. Her reputation grew in Bristol with a weekly show alongside MC Jakes on Ragga FM, Bristol's number one pirate station. She went on to perform three times on Radio 1's 'One in the jungle' and played on various commercial radio stations worldwide. As well as radio she has had TV appearances on VH1, HTV's Sounds of the West and a half hour feature on ITV West about Eden, the all-female live drum and bass act she founded in 2001. Eden featured the vocals of Omi (Way Out West), MC Chickaboo and the mixing talents of Jo Diamond (Drive By). With Dazee's production skills they released their much loved music on Siren Records and featured on several mix albums including a Knowledge magazine cover CD and Dazee's 'Evolutionized'. Nowadays, between gigs here and abroad, Dazee plays regularly with Bristol's 'Dutty Girl' who champion diverse urban beats from hip-hop and ragga to grime and drum & bass. “I'm really down with the philosophy behind Dutty Girl, we want to open the door to other females who might otherwise be intimidated by the male dominated scene.” Recently Jenna G from BBC's 1Xtra presented Dazee with the challenge of compiling a ten minute mix of eclectic tracks from Bristol artists for the Home Grown Weekend competition . Bringing in other Dutty Girl talent, the scratching expertise of DissMiss and the vocals of Kash Honey, the girls won. Alongside DJ Die, DJ Clipz, Distorted Minds and TC, Dazee is also one of the residents at Bristol's highly acclaimed dnb night 'Run'. “I love playing at Run. It's fabulous. One in one out on a Tuesday night, how good is that!” Despite an ever growing schedule of gigs and studio projects, Dazee also finds time to teach music technology and radio production at various youth projects and media centres across Bristol. “I find so much enthusiasm for drum & bass from the young people I teach. There must be something special about it if it's passing down from generation to generation.” Dazee's unique style, boundless energy and passion for her music rock the party every time. From her pioneering foundations to a blossoming future, her philosophy remains the same: “I just want to play the music I love and hope it helps people let their hair down and dance their socks off.”