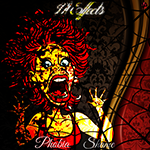 We are pleased to introduce 'Phobia/ Shame' from Ill Effects!

Both ‘Phobia’ and ‘Shame’ pay homage to the sound that Ill Effects has spearheaded since he first began releasing music. Beginning the two tracks, ‘Phobia’ sets itself apart through hollowed kick drums, the type that drive a record forward whilst creating the momentum which would translate perfectly onto any dancefloor. With a groove that sits perfectly underneath the mix, there’s a blending of the dark and light elements which makes Ill Effects such an unstoppable force. Then on the flipside you’re brought into the world of ‘Shame’. This time, ‘Shame’ pushes through with crunching percussive elements filtering through the composition, as you’re taken along for the ride. Each cranking drum pattern moves into the next and before long, you’re left to become fully enveloped within its movements.

One Love from the IA Family!!