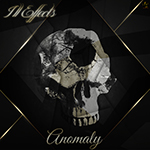 Ill Effects needs little introduction and neither does the Insane Ambition Recordings roster. With a catalogue of releases on the label already setting its levels, the type of which generate total mayhem on the dancefloors across the spectrum of drum and bass, Ill Effects is about to drop his biggest release to date. Clutching a colossal fifteen tracks and demonstrating how far he’s come since first debuting within the scene, he underlines his cut-throat skills across the release. The forthcoming LP on Insane Ambition sees Ill Effects deliver his most explosive work to date, with every trick pulled out for the 'Anomaly LP'.

An entire LP produced on his own and devoted to displaying the signature sounds of Ill Effects, whilst also delving across the spectrum of the drum and bass soundboards, the producer dominates each musical area he comes into connection with. With tracks like ‘Astronomical Phenomenon’, ‘Traces’, ‘Parlour Magic’, title-track ‘Anomaly’, ‘Lights’ and ‘Between Dreams and Reality’, Ill Effects shows the monstrous ingenuity of the sonic soundscapes he’s renowned for, all holding the capacity to create chaos within any club space. Meanwhile, ‘Possibilities’ and ‘New Dimensions’ continues this trend and are records fuelled with enough bass loaded to set an abundance of tremors throughout speaker stacks. And for listeners craving more auxiliary Ill Effects goes above and beyond with ‘21 Grams’, ‘Apparatition’ and ‘Black Sheep Theory’, maintaining his vivacious energy. We’re then met with ‘Premonition’ and ‘All That We Are’, giving a more unique taste to the LP whilst pushing the boundaries of Ill Effects’ directory with their atmospheric and experimental fusion, giving a sense of cinematic ambience. And it’s the same cinematic ambience which also adds to the Intro and Outro, taking you from end to end of this prodigious LP with the same high standards you’re first delivered into.

As a collection, the ‘Anomaly LP’ is a statement of what Ill Effects has achieved and how deep he is impelling himself within the drum and bass scene. His ‘Anomaly LP’ will firmly stand in front of the imperative catalogue which Insane Ambition Recordings has on display, further strong-arming their place within the world of dance music.