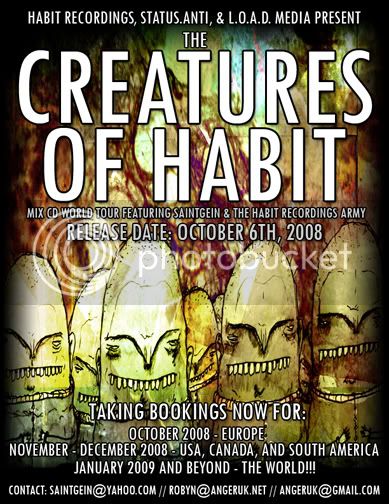 
THE CREATURES OF HABIT WORLD TOUR

Coming fresh off a mini tour that ended with a memorable performance
At serbia’s exit festival, saintgein is back in europe this october to bring down the house once again, promoting his habit recordings labels’s first mix cd “creatures of habit”, as well as the sounds of the drum and bass trio gein.

Starting in 2003, habit recordings skyrocketed in the record bags of many of the top dj’s around the world with it’s forward thinking sound, diy ethic, and more-so its willingness to break new artists, many of which who have become the new elite producers in the scene. The releases came stregnth to strength, as did the underground following that has culminated into habit recordings being a top seller in many shops worldwide and a staple in many dj sets.

Through the years habit has supported and helped nurture the likes of koldfront, pyro, rawthang, psidream, mindscape, the upbeats, chase and status, bad robot, task horizon, vector burn, pacific, and the chosen. And the past few years have seen the habit recordings army come together full force with the likes of audio, gein, spl, limewax, the sect, cooh and vengeanze, axiom, dementia, misha, rregula, miss redflower, and task horizon. This stable has produced sheer genius releases for habit and the following is growing daily.

To bring things up another level, saintgein has partnered with load media distribution to put together the first habit recordings mix cd entitled “creatures of habit”, and for those that know the ethic behind the label, it’s artwork designs, and attitude, the title of the cd truly says it all. The cd will consist of a variety of the back catalogue, many recent stormers, and tons of forthcoming habit recordings material as well as a few unreleased gems. As if this project is not enough, saintgein is putting together a triple pack vinyl ep also named “the creatures of habit” with tracks from audio, gein, spl, the sect, cooh and vengeanze, and a special surprise to coincide with the release of the cd to hit people from all angles. And if that was not enough, saintgein also plans on stepping up the habit recordings digital releases on ithinkmusic.com with a slew of tracks from up and comers to further generate a buzz.

With the cd release in the beginning of october, the worldwide tour is a perfect opportunity to satisfy the old school fans, please the new fans, and gain even more of a following with so much great music backing the tour, which is really what it’s all about anyways. To top it off, saintgein has decided to try and bring as many habit recordings artists on tour with him at any given time to help promote the true meaning and respect amongst label boss, dj, and producer that has become know as the habit recordings army.

And that is only one half of it… yes we really do mean that!

Gein, consisting of the Butcher (formerly of Defiant), Abel and Saint (founder of Habit recordings). Hormed in early 2004, the crew linked up when butcher moved from Los Angeles to Milwaukee, joining Saint and Abel to create one of the most twisted group of producers out there today.

Gein's sound can have a variety of "labels", but brutal comes to mind when most come to describe the demented beats that are forged in the lab.

Coming off a scorching 2007, with an e.p. for Moving Shadow (Street Sweeper EP), a few 12"'s released by the likes of Habit, Guerilla, Tech Itch, Penetration, and Freak, GEIN is set to take things ten steps further in 2008. Gein's forthcoming material is raising eyebrows across the board. Some current forthcoming projects include a brand new record label, a ton of solo projects, remixes, and collaborations with artists such as Current Value, Mayhem, Evol Intent, Counterstrike, Donny, Audio, The Sect, Cooh and Nanotek.

And with saintgein touring for the creatures of habit tour, i’m sure you will get a taste of things to come from the gein spectrum as well.

Available the whole month of october throughout europe. Usa and canada november and december. The world in 2009!