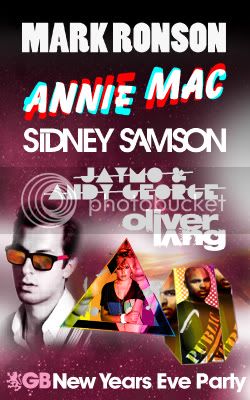 Gatecrasher Birmingham are excited to announce that radio 1 taste – maker ANNIE MAC will be joining the already stella line up this New Years Eve in what will be her debut at Mixmag & Birmingham’s number 1 club mashing up some of 2010s biggest dance floor tracks. As one of the nation’s favourite DJs with thousands tuning into her weekly prime time radio show Annie Mac is a champion of new music and what better way to see in the new decade but with Mac’s sub woofer-busting set that will shine laser-like attention on the most vibrant new dance music in 2011.

Adding to this already phenomenal DJ line-up of MARK RONSON, SIDNEY SAMSON, JAYMO & ANDY GEORGE, OLIVER LANG, ROOM 2 HED KANDI & MORE, Gatecrasher will also be producing a full on event to match. Remember the best NYE event you’ve ever been to and multiply it by 18 years of Gatecrasher production experience and the biggest dance artists in the world right now. Expect state-of-the-art computer wizardry, the most spectacular visual stimulation and out-of-this-world originality and combine it with the stunning environment of Gatecrasher Birmingham for a never-to-be-forgotten NYE celebration.

GATECRASHER will roll-out the red-carpet for the News Years Eve extravaganza and is intent on blasting boundaries to reach phenomenal new heights in terms of production .Expect a thrilling combination of acrobatic artistry, , extravagant design and exceptional sounds. The club has imported the world’s best CO2 Ice cannons, pyrotechnics, lights, lasers, video walls and sound system for a never to be forgotten night. Add to this Gatecrasher’s world renowned entertainment including theatrical performers , internationally renowned dancers performing on Gatecrasher 25ft high LED wall and aerialists suspended from flying rigs directly above the dance floor.

The result? A mind-blowing, mother of all dance parties. The staging, musical enhancement and visual effects will create an out of this world, full-on, adrenalin-fuelled atmosphere..........

Annie Mac is heating things up at Gatecrasher Birmignham for this New Years Eve!

For tickets go to www.gatecrasher.com/tickets
C

For tickets go to www.gatecrasher.com/tickets
C

Fancy winning 2 x Tickets to see Mark Ronson, Annie Mac, Sidney Samson & More and see the New Year in with a bang this year? Then simply text ‘GC NYECOMP’ to 61211 for your chance of winning.

GB: Riverside is one of the biggest selling tracks of 2010 – did you expect the success of the track?

SS: No, i never expected this. Unbelievable how it blew up all over the world.

GB: How do you feel about it now?

SS: It was my ticket to an international career. So i'm still happy.

GB: You’re resident DJ at The Matrixx – a major Dutch club. Do you alter your set according to Dutch/UK audiences?

SS: I don't think so. It's pretty much similar to each other.

GB: You originally worked as a hip-hop DJ – what drew you to house music?

SS: The energy of the crowd. And that i can make my own beats for my dj sets.

GB: You’re playing at Gatecrasher in Birmingham on New Year’s Eve. What can we expect from your performance?

GB: You now have your own record label, Samsobeats. What releases can we expect in 2011?

SS: Some stuff of The Bassjackers, Ilker akay, Bobby Burns, The Flexican and myself... A lot of myself..

GB: Is it true that you started DJ-ing at the age of fourteen? That’s quite young to be going into clubs and playing for hundreds of people?

SS: My first gigs were actually from the age of 16. I was young but i already knew that it was something i wanted to do for a long time!

GB: Do you have any New Year’s Resolutions?

GB: After achieving such fame and success this year, what’s next for Sidney Samson?