I got one saying "Barack Obama Is A Paedophile". Interesting choice for first post may I add

i smell a BOT

jmzmaloney said:
I got one saying "Barack Obama Is A Paedophile". Interesting choice for first post may I add
Click to expand...

I really dont get this thread havent seen no t-shirts

same goes for me, no idea what youre talking 'bout?

I found one looked like it had been used in some sort of roasting blood, sperm and shit all over it, buts thats not the bad thing it had some sort of effigy to Nazi Germany on it with Barack Obamas face on it with a little tache and a side parting with a swaztika on his forehead, doesnt really relate to this thread as it wasnt that funny. Maybe I should start a new thread "Barack Obama Shit T Shirt Shit Thread"

going to be all the rage in thailand, like the iPood craze
C

ill design some tonight! post some up.... if you want any then ill give you the pdf and you can get them printed yourself.... most companys do customer print t-shirts for around £17-20 for one offs....

you know i just had this CRAZY NEW IDEA for a new obama barack tee shirt, i dunno where i get my ideas but check it 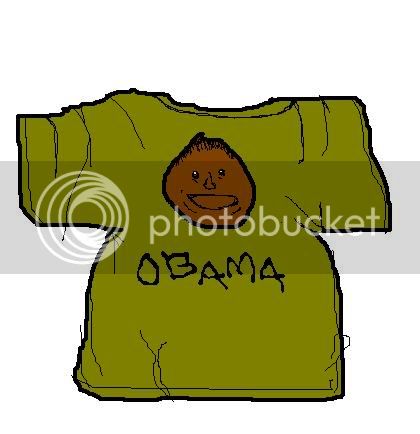 now i know what you're thinking, im not 100% sure about the colors yet myself but we can work this through together fam

it shud be black to the future!