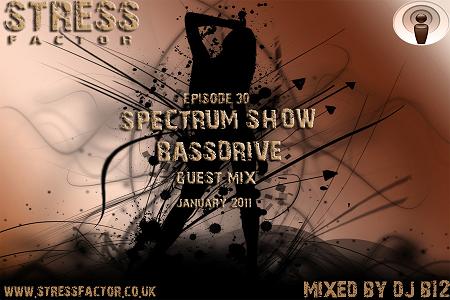 Hello everyone and welcome back to yet another Stress Factor Podcast! This is episode 30, and we have a special guest set by DJ B-12 on Bassdrive. B was asked to do a guest mix for a friend named ACG who has a show on Bassdrive called The Spectrum. The mix premiered 9th of April 2011 with massive love in the chatroom, so big ups to anyone who caught it live. The last 10 minutes at the end were cut out of the mix on the actual broadcast due to some time constraints, so we're giving you the full set as a podcast!

There's a few tunes that you may recognize from previous podcasts and some new tunes as well. Overall we think it came out really good, and we hope you'll enjoy the mix. The mix is an hour long and 138 MB and 320k quality.