FIREFLY are back to The Garvey for an extra special event!!! 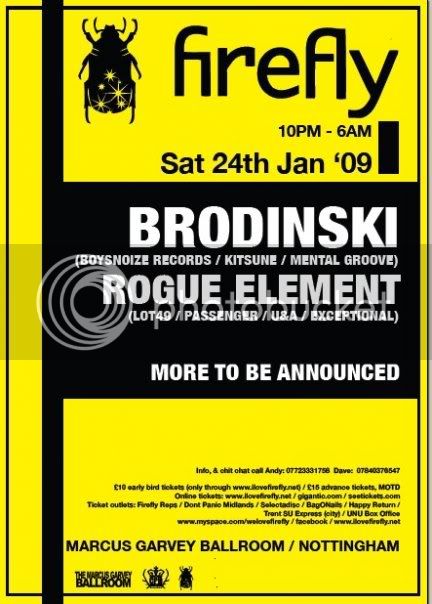 3 massive djs with spanning three genres in one room.
FIREFLY are back to The Ballroom for an extra special event!!! This will be a night to blast the New Year cobwebs away - time to rock your resolutions. 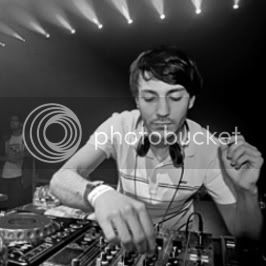 Brodinski is the most exciting dj and producer to explode onto the scene in recent years. Yes, he may hail from France (Reims, Lille) but he is quite unlike any of his Parisian peers. His taste in music is broad and this is reflected in his own productions and dj sets which may encompass noisy techno, bass heavy house through to more melodic minimal. Brodinski has remixed Bonde de Role, Klaxons, Das Pop, Shoes, D.I.M, Heart Revolutions and Adam Sky. Each remix has had a different approach, from the acidic (D.I.M), to vocal techno (Das Pop) to melancholic end-of-nighters (Klaxons). Brodinski has already been championed by Radio Soulwax, Tiga’s Turbo, Bugged Out and of course Firefly! Expect to be hearing a lot more about Brodinski this year and beyond! 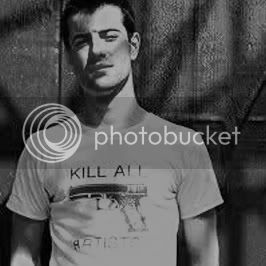 The Rogue Element, aka award winning producer and composer Ben Medcalf. The Rogue Element has taken the breakbeat world by storm. A string of singles received instant support from the Plump DJs, Freestylers, Stanton Warriors, Krafty Kuts, The Crystal Method, Hyper and Rennie Pilgrem and culminated in Ben being awarded the 'Best Breakthrough Producer' award at the prestigious Breakspoll International Breakbeat Awards 2006 at Fabric. In addition to this the acclaimed debut album 'Rogue Rock', released in September 2005, received a nomination for 'Best Album'. 2006 saw The Rogue Element continue in a prolific manner with remixes of some of the biggest names in breakbeat (Stanton Warriors, Freestylers, Krafty Kuts, the Crystal Method) and drum and bass (Noisia). DJ tours have taken him all over Central and Eastern Europe, to the Far East, and to Australia and New Zealand. Continued collaborations with Tom Real, available on Functional, have been similarly lauded and have succeeded in crossing over to the electro scene (He's So Hot Right Now featuring on Tom Middleton’s DJ Mag cover CD). To top off an incredibly successful year Ben won ‘Best Producer’ at Breakspoll International Breakbeat Awards in February 2007. Considering this was a year after winning Breakthrough Producer, and following in the footsteps of previous winners The Plump DJs, this was a huge achievement. A second studio album is currently in its early stages and is expected to be released in around February 2008. 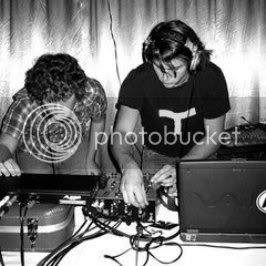 Since 1998, Minus has been the home base and canvas for Richie Hawtin and a small family of like-minded artists, producers and DJs hailing from the Americas and Europe. Hawtin’s Plastikman and Concept projects established the label at the start while inspiring a new generation of producers to join his side, creating one of the most close-knit collectives in electronic music today.

SEE YOU ON THE DANCEFLOOR!

With line-ups that’ll keep you boogying till tomorrow, a world class sound system, new lighting and even a marquee for a chill-out space, complete with bean bags and fairy lights, come find your new home. 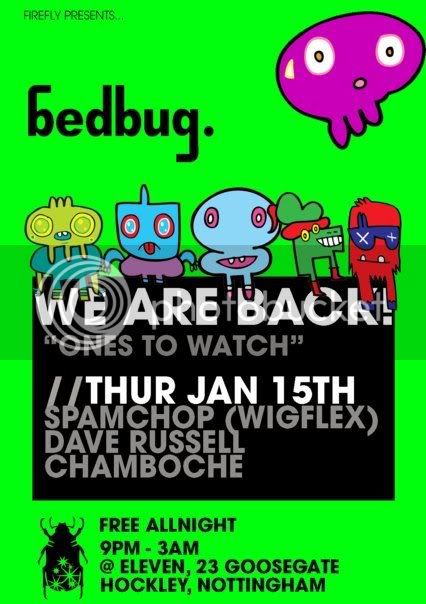 Here are ones to look out for...

After many years wonking nottingham to bits Spamchop rocks up to the decks for firefly.
Making his first apearance for bedbug this week.
Self confessed German Ruudebwoy Spam is resident at his own night WIGFLEX.
To give you an idea of his sound The Wigflex ethos is essentially 'keep it unpredictable (and fun)'
With a soundtrack ranging from dubstep, tech haus and techno to six hour country and western Amen rinse outs
and land mines concealed at random on the dancefloor.
I lied somewhere there, but not about the unpredictability.

after years of classical training, experimenting in production and tireless efforts promoting some of Nottingham's top nights.
6 months later he was warming up before Andrew Weatherall at Firefly, one of the Midlands' leading techno nights,
and thereafter became a resident for the night.
David has supported such artists as Deepgroove, Elite Force, Kyle Geiger.
Obsessively devoted to all things dark and minimal without omitting the deep, soulful elements of techno and house.

Chamboche can best be described as chameleonic, both in his productions and his DJ sets.
Making and playing everything from future disco to bumpin’ techno,
He always had a knack for tailoring his sound to the occasion.
Since 2005 Chamboche has played regularly at Stealth, dollop, Futureproof, Audiophile and Demo.
Supporting everyone from Ivan Smagghe to Erol Alkan.
Check out his sound here…