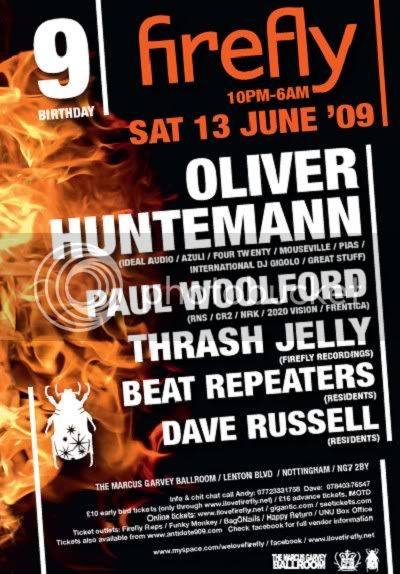 Electronic dance music has dominated urban club culture for more than a decade.
Through its many highs and lows, techno music has proven that it is here to stay.
The same cannot be said of very many techno artists.
Hamburg-based recording artist and DJ Oliver Huntemann is,without doubt,
one of the few activists from the early days still holding the torch.
Via the highly profilic concept series Rekorder with Stephan Bodzin on labels like Cocoon,
Gigolo or Giant Wheel, not forgetting those on his own labels, to the many DJ gigs around the world and,
last but not least, building the Super 8 Studio.
Oliver Huntemann has yet to grow tired of serving up state of the art music!
His instinctive awareness that, in terms of styles and influences, electronic dance music is about renewal,
has allowed him to maintain a unique freshness and keep his special touch very much alive.

His latest coup is a new label: Ideal.
Ideal is totally dedicated to fresh electronic music, primarily in the form of his own productions.
Releasing tracks as Oliver Huntemann is a perfect reflection of his personal approach to the label.
Following remixes for some of the biggest names in electronic music such as Depeche Mode, Underworld,
Chemical Brothers and a successful collaboration with Dubfire (DeepDish),
Oliver is still one of the hottest producers & dj on the scene. So get ready for Oliver Huntemann,
on the scene for over a decade without losing his connection to the underground. This is going to be huge....

With an approach and attitude that is slightly different to most,
Paul Woolford has established himself as one of the most original dj /producer / remixers
that house music has exposed in recent times.

Paul's first visit to Dave Beer's infamous Back To Basics sealed his fate in many ways,
being as it was the place where he heard so many of the records in his own collection in the full club context,
which felt to Paul like jigsaw pieces falling into place. 'I remember clearly the first time I walked in,
I think I was only 17; the only way to describe it was bedlam.
And the overriding thought was 'I've got to play in here one day!??'''.
From that day on, Paul began to fiercely develop his dj skills.
Today he holds a residency at Basics inbetween his guest spots globally,
and a DJ style and ability beyond the reach of most that takes an underground sound and twists it into public conscience.

Woolford released his first record at the age of 21, a collaboration with his friend and studio guru Tony Senghore.
Their fusions of house, electronica and hip hop sensibilities were widely acclaimed across the dance music media
(Single Of The Month in Muzik, Album of the Week in Seven magazine numerous plays on R1 and the Galaxy network),
and paved the way for an open-minded approach with which Paul carries through as the common thread throughout his music.
Paul is heading down to firefly to smash the dancefloor into peices!

TICKETS ON SALE WITH REPS AND USUAL VENDORS
GET YOUR ONLINE TICKETS NOW HERE!
http://www.antidote909.com

***WE ADVISE GETTING YOUR TICKETS EARLY! ***

9 full years of stellar lineups hasn’t diluted our promise to throw the best rave in England, and throw it we do!
For 1 night only, we’re gonna be lining up the best in décor, a mind melting visuals show,
our world class monster sound system and a whole host of entertainers to keep the party going till way past dawn.

Come rave with us and bring Firefly into its 10th year!

See you on the dance floor