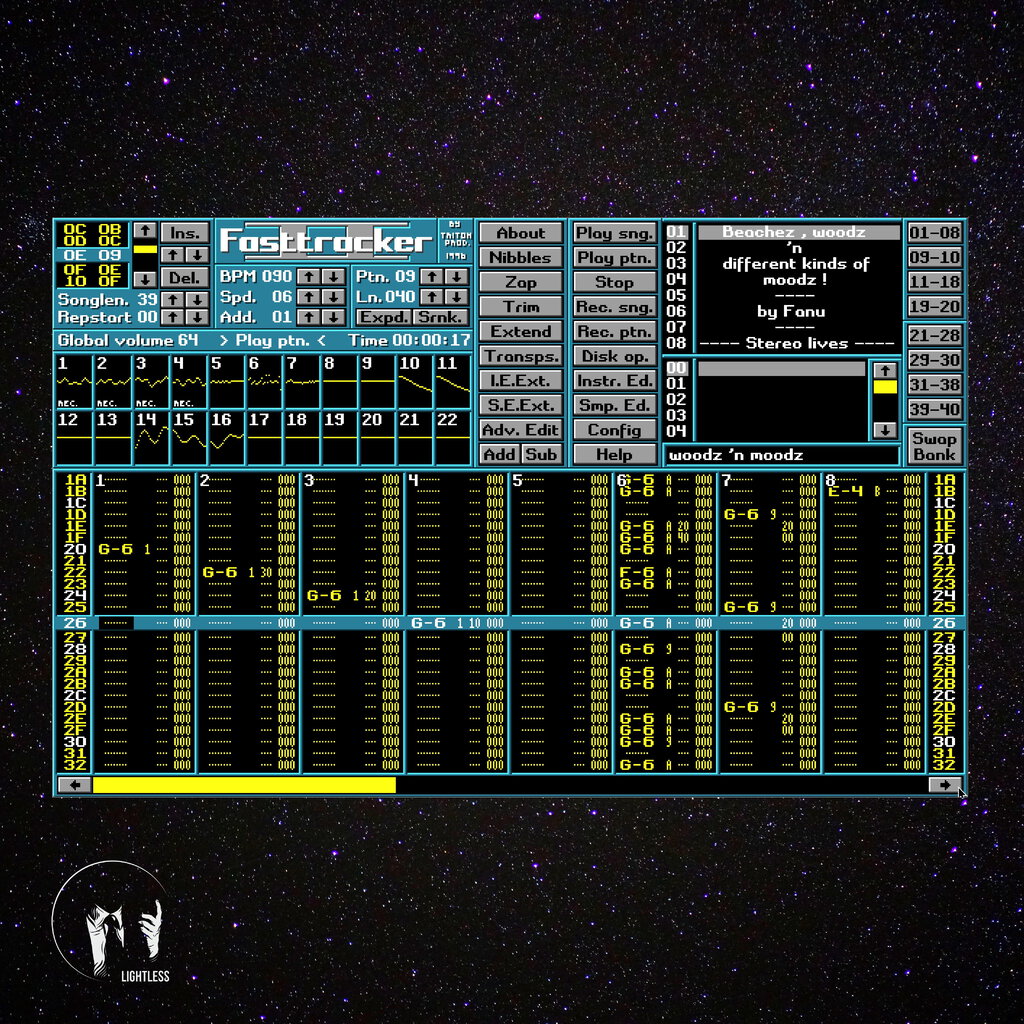 https://soundcloud.com/fanufatgyver%2Fsets%2Fold-tracker-stuff-1997-1998
• BANDCAMP
• SPOTIFY
• APPLE MUSIC
• SOUNDCLOUD
• TIDAL
• …and it's on every platform imaginable, so just take a look

Time goes by fast when you're doing fun things like making music.
This year, I'm happy (or just shocked) to say I've been making music for 30 years (started in 1992 with Octamed & Amiga).

One thing I'll celebrate that with is releasing some of the oldest Fanu songs that still exist: all these were made in '97'/'98.
So meet Old Tracker Stuff EP.
(Thanks to the then early internet, these were saved to the web as .xm tracker files)
These are from what still were quite formative years to me. I was trying to find out what I wanted to make, and I guess these already show were I was going.
Good Looking was a huge influence, trip hop, Earth series, Tek 9, Headz, Nightmares On Wax, The Roots…that sort of stuff.
You can probably hear it in these tunes. Half of the EP is jungle, and the other half downtempo.
Maybe the song structures are a bit different or weird by today's norms, but the vibe is there.

I grew up in a boring countryside town of 8,000 residents that offered very little of anything exciting unless you were into skiing or the basic sports or were planning a future involving field work.
I was not.
Skateboarding, urban vibes, music mags, and also this urban music that I consumed thru radio and luckily CDs I was able to order were all I wanted.
Making music, even back then, was a way to stay sane (I lived between some fields, woods, and lakes), and longing for more urban areas was in my mind all the time, and this music kind of took me away from a setting I wasn't very stoked about – both mentally and later on physically.
I moved to Helsinki in 2000 to get to experience the club life and live in a more urban environment, which I don't regret. Music was a catalyst in all this.

Anyways…it's a small piece of musical history and I think the 25-year-old songs have stood the test of time quite alright.
Sure enough lots has happened in those 30 years, and there's been ups and downs, but somehow I've always kept making music and will do it till the end.
I've had my frustrations, questioned everything musical every once in a while (I guess that's normal for every artist), but I've never been able to not be a music person and a music-maker, not even when I've tried.
Since I played those first sounds with Octamed on Amiga in 1992, I've kept going.

Hope you can feel the history while listening.

For the nerds (like me):
Songs were originally made with Fasttracker 2 in '97/'98, imported with Renoise in 2022, and then very slightly retouched with Ableton Live.
They are, however, largely in their original state, with very minor mixing/mastering applied, to respect the older aesthetics.