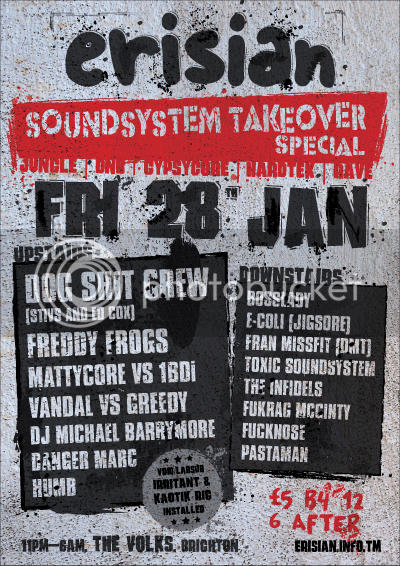 Erisian is goin into a new year with a BANG! This time we have guests and sound systemssss from all over the country, including the likes of Life4land, Kaotic, Irritant, DMT, Jigsore and Toxic with Blasting Void and Labsubs rig provided by Irritant and Kaotik. This is gonna float like a butterfly and sting like a bee.

Powered by Irritant and Kaotik Sound systemm, a Monsta Bristol link up with labs subs void and fuktion one,*
ONE WORD NEEDED, BASS!

THE DOG SHIT CREW, THAT'S A RUGGED CREW!" said Mr Key in 2007, pretty much explains it, dog faeces. Born in the mean streets of Romsey town in the year of the dog 82, the crew whose soul existence revolves around dog shit.

Danger Marc's sole existence since he was about 9 was turning up at teknivals playing 6 hour sets to 800 people on a 100k stack. Danger is the sound that has become like a robin hood likeeee figure in the hearts of the UK underground, pumping out everything you wanna here with hardcore beats amash upupupup selector not to be missed.

Fresh back from the electro gypsy tour with the life4land crew,
Freddy has been rinsing the London scene since the dawn of time with his unique blend of clownstep and techno, watch out when Freddys about. He is also the founder of Frogs Records label which has released 1000s of vinyl over the past 5 years.
Promoting his new album Mad As A Box Of Frogs, Freddy is coming to town to make us stomp.*

A young gem in the rave scene and a thorn in the side of the Bristol's police force, Mattycore will be rinsing some of the finest raggajungletek, hardtek and rinsing drum and bass known to mankind. Mattycore has been representing life4land since the early free party days of Cambridge to the urban warehouse environment of Bristol, with the DMT crew the future is bright and its definitely not orange. With recent releasesn HHHand baked Records and SINISTRO, Matty will be bringing the 4 to the floor.

The right hand man of the DMT sound system empire, drum and hardcore producer hailing from the west, Barrymore will be dropping bombs to say the least, knowing a crowd better than the back of his hand, cant wait for this geezer to come to the coastal resort of Brighton. Watch out for the badman that is Dj Michael Barrymore.

GREEDY has been the front man behind PUNISHMENT Sound System from the very start. Playing a heavy but original set that always has people raving hard!!! This man is one to watch for 2011, with serious heavy weight projects lined up such as Music Production, Legal Warehouse Parties, New Sound Systems and much much more!!!! KAOTIK SOUND SYSTEM IS GOING TO THE NEXT LEVEL!!!!*

1BDi, the main man of Irritant Sound System!! Started his free party business in our very own coastal seaside resort of Brighton before joining the Bristol and European adventures with DMT crew and Life4land massive. Badman ragga jungle bizness right here!!! He is a heavily committed raver, with years in the business, you've all probably heard him play at some party, somewhere. Referred to by some as the one man machine and Lord Irritant. For massive abuse of speakers where ever he can find to stick them, big up the Irritant crew.

Humb has been known to have a dirty kick drum or two up his sleeve to say the least, beastly amens and dirty twists are the kinda thing to expect from Jigsore jungletek badman with his new release Jigsore Records, he's gonna put the rig on fire.

Part of the Kaotik Sound System collective, smashing dandance floorsth sides of the channel for 8 years!! Started off at 11 years old playing the guitar, then got involved in the free party scene and discovered electronic music. Started producing 8 years ago. Booming hardtek ragga classics coming this way.

The Life4Land newest badmen on the seen with an album expected early 2011 have been tearing up many a soundsystems over the last few years with an extensive European tour and world gigs next year. They will be rocking everything from junglebassline to skacore, expect nothing, receive everything.*
This would all be fine and fair if it wasn'ttttttt for my bad sisterMCCCCCCC bad ladysLondonnnnnnncomingngngngngngn down to smash up the mike selectorbasically.lly.lly.lly.lly.lly..

Fukrag Mcginty (Irritant, Shindig, In Brighton'ston'ston's is Brightons grandaddy rave while not as actsound systemsystemsysteme soundsystem scene, he still spins the baddest wonky tekno around, although he has more records than most people have had hot dinners, he is known for his eclectic taste and outrageous style.

Boss Lady is a RAGGA JUNGLE / HARD TEK TURNTABLIST and PRODUCER from Cambridgesound systemsn smashing up soundsystems for some time with the likes of the Toxic and Uprising crews and recently has been working with the Showdem crew from Brighton with the likes of SCRAMBLED ED and LOKI on the dub vibes. Big things coming this way so watch out!!!

"Fresh from the Devon free party scene, E-coli plays mash-up in the true sense of the term. Expect an eclectic mix of jungle, dubstep, breakcore, hardcore, hip hop and everything else in between, featuring new tracks from unknown local artists, alongside classic sing-alongs, and with the speed ranging between 130-240 bpm it will be impossible to stop dancing."

Free party diva, Fran is a mistress of sound systems, expect big bad and heavy selector from this Bristol gal. Also involved in festival and party organizing teams with the likes of the Boomtown, shes a true junglist.

Relatively new boys on theUK circuit, but completely pro with the right ethos these guys are gonna go far don't be surprised if these guys are running the show in the next few years with there first appearance at Erisan, but no means the last theres plans in the pipeline for then running some nights down here with us.*
Here's their next night in Cambridge, the month after at Cambridge's biggest venue The Junction with the biggest jungle line up I've seen for years.*
http://www.facebook.com/event.php?eid=167958189911079

Fucknose (Erisian, In The Face)

Fucknose has organized more nights in Brighton than I'd think he'd like to remember, even if he could, it would be pointless. From Motion Sickness to Erisian, and his newest escapade In The Face that was started with Katchpyro, Gash and X119, focusing on the wonky bassline movement that is appearing in the UK thanks to the help of people like Fucknose.*
what is to be expected form his set is summarized in two words, THE CROWD.

Pastaman is the guy responsible for Satta Sounds which is a Jungle & Ragga-Jungle record label based in Norwich, UK. It started in 2006 as a underground dance event, and over the years has grown into a record label. The first release (SS001) came out in early 2010 Ft. Sixteen Armed Jack, Pastaman & Cherub, and Killawatt. SS002 will be available from early 2011 Ft. Dub-Liner & Pastaman. Satta Sounds also promotes Reggae & Jungle events monthly in Norwich & Brighton.


This event is about the music and is for the people who have been actively living it and making this shit happen, weather its running rigs and nights or making tunes and rinsing them to the general public.


Only 5 of your English pounds
6 after 12
THE VOLKS