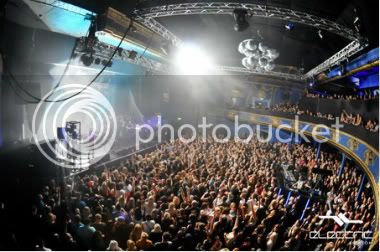 
Last year was an astounding success for massive bass duo Nero as they established themselves as heavyweight dubstep producers with an explosive live show. With their UK tour this spring, including a sold-out show at Brixton Academy, they’ll be hosting their official after show party at Electric Brixton with a killer lineup!

Radio 1 DJ Zane Lowe will be weighing in on the decks as support, followed by Delta Heavy, Chasing Shadows present: KillSonic, Millions Like Us and Pete Jordan. For your only chance to see Nero live in London this spring, and witness them smash 2012 to pieces as well!

Tickets: £10
www.electricbrixton.com
This is an 18+ event

BAR:RAGE comes to Electric Brixton to showcase an all-night heavy lineup of true drum 'n' bass legends! Two rooms provide an eight-hour assault from the likes of Dillinja, Mampi Swift, Grooverider and Ruffstuff. Making full use of the pounding soundsystems at Electric Brixton, this night is not for the faint-hearted. MCs Skibadee, Shabba, Funsta, Harry Shotta propel this already premium lineup into DnB heaven.

For those who know UK DnB, this is a night not to be missed!

In keeping with the album concept, it was vital for Paul he played a venue never before visited. Hence the opportunity to orchestrate a London clubbing revolution! With Electric Brixton’s auditorium draped in history, bespoke lights, lasers and sound, this will ensure a trance haven like never before.

Register at http://www.pvdlondon.com for priority access, and you’ll also be sent an exclusive PvD ‘Evolution’ preview track for free! Priority tickets will be available to purchase from 9am on Wednesday February 15th

Tickets: £20 advance
www.electricbrixton.com
This is an 18+ event


Carl Cox London. Three immortal words which when combined cause mass hysteria unrivalled by any other DJ.
An irrepressible force who continues to push the boundaries, Carl will bring together his two decades of experience for an incredible night under one roof. His extreme talent and hunger for new music continues to feed his unparalleled dedication to the scene. This will be showcased at ‘The Revolution’ where Carl will feature alongside some especially chosen guests; the leading names in house and techno and fellow pioneers of the underground scene.

This April Electric Deluxe Presents – EDLX’s forward-thinking techno party – toasts four years on the circuit, with a stellar German cast that lands in London at Electric Brixton on April 28th.

As part of its full-on birthday weekender – which begins in Lausanne with Phil Kieran and Thierry Collado – EDP brings a slice of Berlin and Berghain to London next, courtesy of Marcel Dettmann, Marcel Fengler and the esteemed Sandwell District live. As ever, proceedings are hosted by Mr Electric Deluxe himself, Speedy J.

Synonymous with the infamous ‘Techno Mecca’, Dettmann and Fengler have been carving individual legacies from the booth of the Berghain club, alongside a burgeoning number of Ostgut Ton records. Last year saw Fengler step up to mix the fifth instalment of the institution’s compilation series, with Dettmann releasing his own comp ‘Conducted’ through Belgium powerhouse Music Man Records.
As for Sandwell, though the label has ceased, the shadowy DJ-production team – consisting of Regis and Function – remains very much alive. Mystique and mythology are the seams running through the pair’s clot of solo and collaborative vocations. Stemming back to the influential ‘Downwards’ days, as Sandwell they have carried on the torch to become the cult and revered underground icons they are today.

After first appearing in 2008, fast-forward to 2012 and the Electric Deluxe brand is firmly established as a bastion for freewheeling and thoroughly modern techno. In that time, the label has become a haven for artists like Terence Fixmer and Brendon Moeller to pursue unchartered projects, as well as a platform for collaboration and innovation, which has been channeled into a Europe-leading events vehicle: Electric Deluxe Presents. And with lineups in the past boasting the likes of Richie Hawtin, Jeff Mills, Matthew Dear and Modeselektor – to name a few – it’s easy to see why.

Electric Deluxe Presents comes to majestic music venue Electric Brixton for the first time this April, bringing with it an all-star lineup of some of Berlin techno’s most dominant – and innovative – forces.

Festival favourites and party-rockers, the Dub Pistols – led by main man Barry Ashworth – are a national treasure. The London-based ska-dub-punk-hoppers have been causing dancefloor uproar wherever they go for 15 years. Now Dub Pistols push forward with their fifth album ‘Worshiping The Dollar’.

Bringing together a supporting lineup brimming with British legends, this night will be a showstopper from start to finish. High Rankin, self proclaimed ‘dubstep dandy’, Rob Da Bank, Xfm heavy-hitter Eddy Temple Morris with his eclectic selection, and dubstep renegade Rednek will provide the soundtrack to this album launch party.

Make sure you are a part of it.

Tickets: £15
www.electricbrixton.com
This is an 18+ event

Since releasing their second EP, 'She's So Hard', in November 2009, the Australian four-piece The Jezabels have toured the UK supporting Tegan & Sara, Katie Noonan and Josh Pyke, and as headliners of their own sell out shows. A dynamic band fronted by the charismatic Haley Marey, The Jezabels will bring their passion to a live show at Electric Brixton, playing big hits off their EP such as 'Hurt Me' and ‘Easy to Love’. This band is certainly one to watch.

LWE and Cocoon join forces to present to you a very special set from Cocoon boss Sven Väth, who will be joined by one of the hottest talents on the Cocoon roster at the moment - Sascha Dive. This is the first full Cocoon show featuring Sven and the gang in London for a quite a while, and with such a special line up tickets will fly off the shelves.

Sham 69 reformed last year for a long-awaited show at Brixton’s Electric. It was a huge success, and a heart-warming response from the eclectic crowd reignited Jimmy’s love of performing.

Due to public demand and with renewed passion, Jimmy Pursey, Dave Parsons and Dave Tregunna will be back at the Electric on Saturday 14th July. 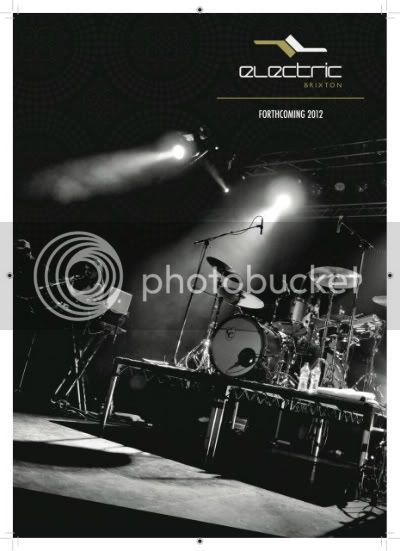 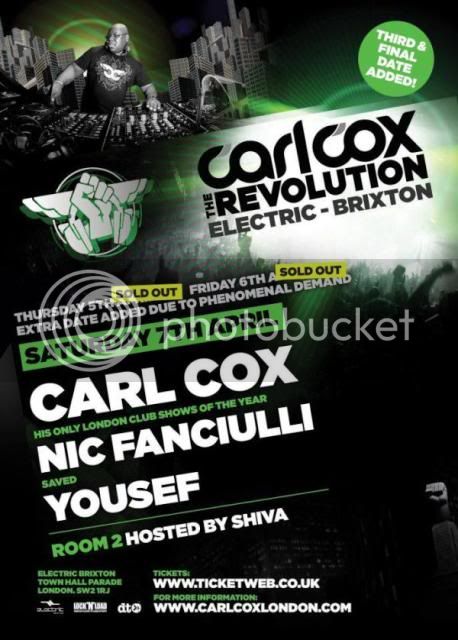 “Being able to come back and play at one of the most revered clubs in the world is awesome. There’s a lot of history there, a lot of musical history, of incredible parties and DJs from many years ago. To be part of that new history is amazing.” Carl Cox on Electric Brixton (formerly The Fridge)

Following two rapid sell outs for Carl Cox’s eagerly anticipated return to London at Electric Brixton, a third opportunity to experience The Revolution is quickly heading in the same direction. Taking place on Saturday 7th April, over 50% of tickets for the final date of this very special residency have already been sold. This chance to catch a maestro at the peak of his electronic wizardry has had those with a thirst for cutting edge dance music clamouring for tickets. Carl’s perpetual hunger for artistic creativity keeps him hooked into the underground scene, making him a true dance music pioneer and one of the all time great DJs.

Joining Carl on the night will be a key figure at his Space Ibiza nights; Nic Fanciulli. With an upcoming Balance compilation on the horizon and huge Saved events across the planet, 2012 is looking set to be a massive year for the Saved Records boss. An ever present at the world’s leading parties, April alone will see Nic play the likes of Panorama Bar in Berlin and Womb in Tokyo, as well as make his Electric debut. His recent collaborations with the likes of Detroit legends Rolando and Stacey Pullen have been huge favourites of ours over recent months, whilst his intelligent, yet driving strain of house and techno will be sit perfectly within the sights and sounds of The Revolution.

Completing the main room lineup will be all round music aficionado and fellow resident for The Revolution at Space Ibiza; Yousef. Founder of Circus, Liverpool’s huge club night that continues to showcase the world’s finest house DJs, Yousef has always kept loyal to his underground roots. He is now found destroying the world’s greatest clubs and festivals such as Ultra in Miami, Dance Valley in Amsterdam and Manchester’s Warehouse Project. He is sure to be on outstanding form when he arrives at Electric Brixton.

Room 2 will be a more up close and personal affair with Shiva at the helm guiding you through a house music journey.

With this third date met with phenomenal demand and the previous two nights selling out extremely fast, do not hang around if you want to experience this spectacular Easter residency. Tickets are on sale now priced £20.

London - be prepared to have your breath taken away! The Revolution is coming…

We are down to the last 150 tickets for Paul Van Dyk's album launch at Electric so get in there quick if you want them! 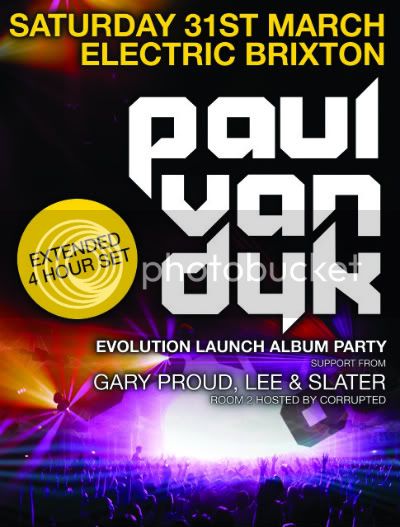