Anyone who listens to dub will know how important your effects are.....

This is a tribute to all those super cool effects that keep me happy for hours on end.....

Would like to hear what you guys use to get that dub sound too, so post yours....

Probably one of the most frequently used plugins i own..... ive used it on pretty much every track ive made since i first got it

The tape and analog settings are really cool, have a nice colour to them.... nothing to dramatic but really cool.... and its free!!!!! 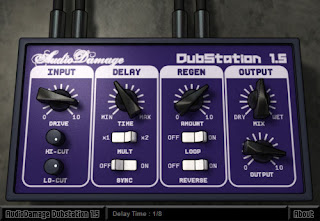 The name says it all really.... this thing is made for dubbing...... the drive control is great for getting a really cool overdriven delay signal..... and the feedback/regen control is crazy- USE WITH CAUTION!!!

This is an attempt at emulating a Roland RE-201 Space Echo, a favourite of Lee Perry. Its not the most realistic emulation but it does sound very cool, great colour to it..... and great fun to play with!!! No dub track would be complete without spring reverb.....this one comes free with computer music mag.... its a great effect, not the most realistic spring sound but can be used to good effect.... used this on quite a few tracks now..... works best on instruments rather than drums but can still work wonders if you tweak it right

The sound of this depends on the settings..... sometimes it will sound great and sometimes like a pile of shit...... good fun though, and the spring tension & dispersion controls are well appreciated by a spring lover like me

Convolution reverbs are great for dub, purely because it allows you to use the sounds of the vintage gear that you wank over...... ive got some super realistic spring reverb sounds from this

an impulse to lookout for is one made from an Orban 111b reverb.... i'll up the impulse if anyone wants it

Its been a while since ive used this but it deserves a mention.... its one of the Interruptors free plugs, i think i remember logikz saying its modeled on the Tape Delay in Logic

For super long decaying delay tails, manually ride the feed back control..... dont overdo it though.... it can get VERY loud extremely quickly

Location
Halfway between the gutter and stars

I use mostly OhmBoyz and The same Analogic Delay you got. Will have to check some spring verb things though, is that the source of the really 'wet' sounding verbs?

i love analogic delay, link feedback and groove to 2 knobs on your controller and jam

kama said:
I use mostly OhmBoyz and The same Analogic Delay you got. Will have to check some spring verb things though, is that the source of the really 'wet' sounding verbs?
Click to expand...

also, have you heard king tubbys trademark thunder clap sound?? well thats the sound of him banging the reverb unit

Location
Halfway between the gutter and stars

MARLZTAH said:
well thats the sound of him banging the reverb unit
Click to expand...

What, literally hitting the unit??

All about TAL Dub!

kama said:
What, literally hitting the unit??
Click to expand...

yeah!!! its a mechanical machine.... it literally has a spring inside which generates the reverb.... so when you whack it the spring vibrates like crazy!!

interruptor in the front line of course, but good dub effects can be made out of a tablecloth if you know the tricks well
S

One of my fav plugs...
probably get more use than any
other delay plug i have...
the feedback is so warm...!
Audio Dammage are a great company...
Quality plugs for cheap....

yeah ive heard about it.... just wish i had a uad card

DJ Wizz said:
this is irrelevant
Click to expand...

good stuff! i love delays to death and use them on nearly all my compositionz, esp the PSP84 thingy, sorry not got a pic of it buts its a great analog style delay

yeah, have to say that thanks to plugs like these I see the amount of dub fx growing with every tune I make! addictive...

i checked out your reverbnation page, you got some nice sounds going on there mate!