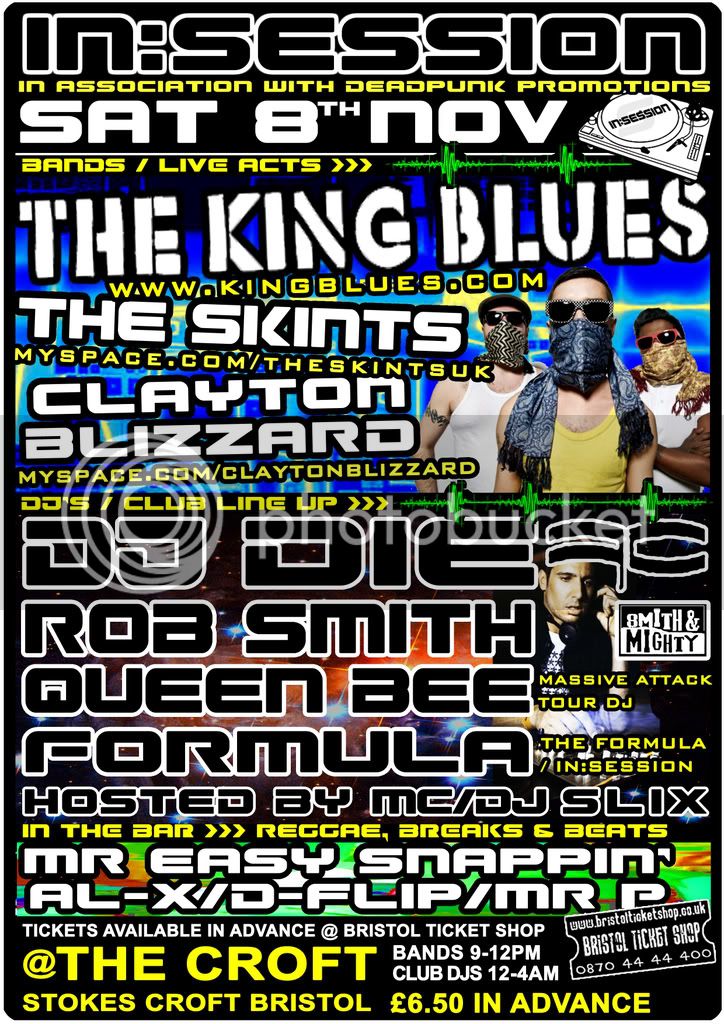 “This is rough, radical music that should unsettle the rulers of this country. A new generation of musicians are challenging war- monger politicians and their courtiers (Bono, Geldof etc). I hope these songs prosper.” Tariq Ali

“The King Blues are back with a new record, I forgot how great this band are.” Zane Lowe- Radio One

"They did a spellbinding performance, it was just superb, really really special." - Jo Whiley Radio One

"The King Blues are probably the most laid-back angry band in the world." (KKKK) - Kerrang

"Riotous sozzled punk with more than just a pinch of salt." (pick of the week) - NME

“Street politics and protest with a smile and a wink. Invigorating, the King Blues reach the places others can only dream about reaching.” 5 out of 5 - Rock n Reel

“The best album you will hear all year” Last Hours Magazine

“The King Blues are infiltrating the mainstream with integrity intact. ” Big Cheese

“This is protest music at it's most vital and basic a slice of life that's recognisable enough to call together everyone fed up of being spoken for. Excitingly necessary.” - Punktastic.com

The Skints are a young, DIY 4-piece from East London that play pop-fuelled, party-packed, passionate ska songs, with a cheeky dash of thrash, dub & reggae and a punk rock ethos.

Since forming at school, the 3 boys & 1 girl settled on their line-up in May
2007 and have been working hard, racking up 60+ shows, a DIY mini tour and some cheeky Radio 1 airplay!

With the youngest members being just 17, the future is theirs for the taking and it shouldn't be long before The Skints are taking over the world.

Blizzard’s cultural mash of rap/folk/politics is like nothing you have heard. Stripped down beats serve as a backdrop for a half sung, half spoken rap style that is both honest and engaging. Blizzard’s live show is a lo-fi, one-man band affair with a simple vocals/acoustic guitar set up however this studio effort sees percussion, samples and electronic beats and sounds thrown into the mix. This only serves to solidify Blizzard’s unique sound.

DJ Die, real name Daniel Kausman, was born in north Devon (1972). Throughout the 70’s and 80’s he attended many U.K festivals with his mother. As a result Die grew up surrounded by music. With early influences such as his father playing guitar, he began a journey into music. From Rock n’ Roll to Ska, Two Tone to Punk, he ultimately finding a passion for Hip hop. It was around this time he moved to Bristol and took up skateboarding. Here he discovered that Krust and the Fresh Four crew were mixing house, hip hop, rare groove and funk at warehouse parties just down the road from his house. “There was a movement starting around the time - there was the Wild Bunch thing, the graffiti thing, the carnival and sound system thing happening up in Bristol." Die got his first taste of musical production around 1988, when he hooked up with Jody Wisternoff, now of Way out West. Together they formed Tru-Funk and produced 4AM, a house tune released on Smith and Mighty’s imprint Three Stripe Records. They followed with two hardcore EP’s under the name Sub-Love and made numerous DJ appearances at early Universe raves. As Jody’s and Die’s musical paths split Die started playing at the many free party’s happening in the southwest, continuing to make a name for himself as a DJ. In the early 90s a chance meeting with Roni Size on the Gloucester Road in Bristol, led to what would be a long musical relationship. Beginning with their first collaboration, ‘AGILITY’ on Bryan G and Jumpin’ Jack Frost’s label V Recordings. Soon after Die and Roni, AKA Scorpio forged the seminal classic ‘MUSIC BOX’, which would ultimately lead to the birth of Full Cycle. This label would become the home for Krust, Roni, Suv and Die for many years to come. Die’s ongoing contributions to Full Cycle would include such tracks as ‘LIVE AND DIRECT’, ‘REINCARNATION’, ‘CLEAR SKYZ’, ‘JITTA BUG’ and ‘DROP BEAR’. Also with releases ‘SPECIAL TREAT’, ‘SLIDE AWAY’ and ‘AUTUMN’ for V Recordings, as well as tracks for off shoot labels Dope Dragon and Cronic under various pseudonym’s such as Swabe, Mono Man, D.N.A (with Bill Riley) and 3 Way (with Roni and Krust) . This catalogue of quality productions subsequently lead to D.J bookings around the globe, all over Europe, U.S.A, Australia / New Zealand, Japan and Brazil usually together with the voice of Full Cycle, Dynamite MC. In 1996 the Full Cycle crew came together with Roni size at the helm to start Reprezent, and record the Studio album ‘NEW FORMS’ on Talking Loud records. This album went on to win the 1997 Mercury Music Prize. They then put together a live show and set off on a world tour performing in places such as New Yorks’s Central Park and the famous BBC studios for the television show Later with Jools Holland. Fueled by the success of the Album Die kept producing his own tunes, also finding time to remix tracks by major artists such as DJ Shadow, Towa Tei, DJ Cam and Pharoe Monch (GET THE FUCK UP).

Rob Smith is a DJ, musician and remixer from Bristol, UK. He is currently on the Grand Central Records independent record label, playing breakbeat hip-hop, dub and reggae-influenced music, as well as producing dubstep tracks as RSD on a number of labels. Rob was formerly a Drum & Bass/Jungle DJ, most notably alongside Ray Mighty and Peter D Rose in Smith & Mighty on the !K7 Records label. Smith and Rose also produced music under the moniker of More Rockers.

For the last 10 years Queen Bee has been DJing all over Europe with Daddy G from Massive Attack and also as Massive Attack’s Tour DJ . Queen Bee began her career on the legendary pirate radio station ‘Emergency Radio’ and Respec Fm before becoming music programmer for FEM Fm, Britain’s first all female radio station on 1992. Gaining a reputation for her classy mix of bass heavy Hip Hop, Funk, Reggae and Latin, Queen Bee soon became a favourite on the Bristol club circuit with residencies at La Boum at St Nicholas House, Chocolate City at The Blue Mountain and The Fruit Machine at The Thekla. Appearances at Glastonbury Festival (resident DJ on the Jazz World Stage for 12 years) and at international WOMAD festivals followed. Queen Bee now successfully manages ‘Cosies’ bar in Portland Square, a much-loved Bristol institution. Her knowledge and contacts have been pulling in many-respected local DJ’s and a fantasically mixed crowd of discerning music lovers, which has attracted comparisons of it being the new DugOut! Queen Bee’s party style sets and eclectic tastes continue to rock many a dance floor at home and abroad – catch her at 'Crucial Business monthly @ the Tube club,‘Girl Wonder’ monthly at ‘Cosies’ and Bristol HiFi @ The Dojo Lounge.

After successfully completing a degree in Creative Music Technology degree at Bath Spa University, Formula is back in the studio writing deep, squelchy and dirty Dubstep. Having grown up in Bristol drum and bass and Breaks has always been a passion. Having Dj'd in and around Bristol for several years (Previously known as Dj Quest) he has turned his attention to production. During a Btec in Music Technology he met singer / song-writer Colleen Quinn and began writing tracks together. This led them to forming the band, 'The Formula', which they started together in 2004. The band has now developed into a four piece breaks band, incorporating Jago on drums & Percussion and Ben on Double bass. They have enjoyed playing festivals around the country and gigs . For more info on The Formula please check out www.myspace.com/theformulabristol

IN THE BAR / THE MIGHTY IN:SESSION RESIDENTS

DOORS OPEN AT 9PM / CLUB FINISHES AT 4AM