Demon Breakz EP is OUT NOW!!!

Today we at the Extent Recordings Group are proud to announce that the Demon Breakz EP is now available at all digital stores online!

This Ladies and Gents, is one hell of a powerful E.P. It features some groundbreaking tracks from Stranjah, Gold, Darkhalf, Gappa G, Centrik, The Last Hero and Beat 70, Terminus and Sub:Stance, all of which have been carefully selected over the past 7 months, so that you can witness the true power of Extent Recordings and it's music! 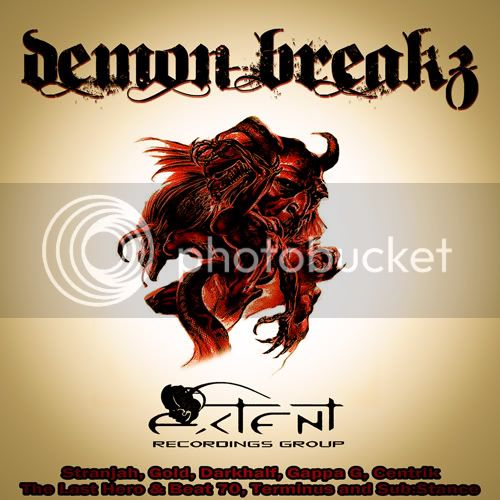 Every track on this EP is very powerful, they all have very strong structures to the music and very deep and heavy vibes. Most of which have that Jungle feel to it, but brought right up into the future as we know it now! We are very honoured to have Stranjah on-board this project, The man has such amazing talent and a lot of history within the DnB scene already and it makes us proud to have him as a big part of this EP.

Stranjah took his first step into the world of drum and bass upon releasing his premier single “Freezing Point” and “Trouble Maka” on Flex Records (1999), followed by further releases on Crimsyn, Media, DNB Arena, and Doc Scott's imprint 31 Records. To date, Stranjah has worked with the most high-profiling labels in drum & bass including Renegade Hardware, Architecture, Hospital and Goldie’s Metalheadz.

The Same goes for Gold aka Alex Gold ( One 3rd of Lionfire) , who's track ' the Break' has made a big featured on the Demon Breakz EP. Already getting support from Crissy Criss on 1xtra and many more, this track is sure fire to get you skanking out, no doubt! In 2010 he toured with Reggae veterans UB40 and is in the process of putting a 'Bass Culture' remix ep together. Over the last year Gold has been working closely with artists such as Bladerunner, Aries, Dawn Raid, Stanza, Jacky Murda, Jinx & K-Jah, as well as his new project, Lionfire, recently signed to Ray Keith's Dread Recordings imprint as well as remixing tracks for Ragga Jungle crew, Chopstick Dubplate. The Future is looking strong for Gold, with forthcoming tracks set to be released on labels such as Co-lab, Pure Vibez and Lion Dub Int as well as an EP set to drop on Future Jungle label Sub Slayers.


Darkhalf lets loose on some half tech, half Jungle beats with his powerful track 'Riot' which was written under the influence of the riots that happened recently in the UK. Previously winner of the L Double 1xtra Dubplate competition in 2003, Darkhalf went onto releasing a track on Underdog Records and then moved onto digital signings with a few labels before finding his place at Extent Recordings . He then went onto releasing a track with Dubkraft and then onto Extent VIP Recordings with his track ' For the Love. T3K LTD also recently released a remix that he put together for Kr4y ( Protozoa- Darkhalf remix).Recently remixing Gappa G and Hyper Hypa's blazing jungle classic 'River Nijer' along with the Breakologists, this man sure has found his place within the Drum n' Bass scene. You can also check Darkhalf every 2 Wednesdays at 20:00-22:00 gmt on http://freestylefm.net on the Extent recordings group radio show. Expect a lot more from Darkhalf in the near future including collaborations with Terminus, Tobias and Gappa G.

Gappa G returns on the label too and does he ever know how to make you move your feet! His track Equal rights and Justice is a message for all to take heed at! What with the sub-low bassline and smooth jungle rhythms, this is a track that will turn many heads! Gappa G & Hyper Hypa made some of the biggest jungle tracks in the early 90’s , Tracks such as Information Centre , Feel like a king , Junglist greatest hits feat. Tippa ire and Crucial Robbie were just a few of the tracks that smashed the raves up and down the country in the early days of the jungle scene. Junglist greatest hit was featured in a channel 4 film called ‘New Town Boys’ which was written by mark straker who was Gappa G’s manager at the time , Back in 1994 ‘Information Centre was remixed by Busy B , Flex , Dj Hype , Dj Ron , and Ray Keith and in 2009 the track got two fresh reworks , One from Bladerunner and the other from Serum and both of the mixes have been killing the dance floors of late and has got Gappa G back on it , So expect to see the man himself playing around the country and beyond real soon.


Centrik who comes at us with his track' Unreachable' which is a very deep, tribal track that captures the mind with the intricate beat patterns and feeling put into this gorgeous track. Centrik who is currently signed to Extent Recordings, Extent VIP Recordings, E-Motion, Surface Audio, Stepping Forward and Influenza media, has had support from artist such as Randall, Raiden, A-Sides, Ash Attack, Bailey, Crissy Criss and Spectrasoul. He plays out a lot in Reading, London, Birmingham, Woking and Camberley and he also plays at Adjusted Audio's nights in Reading at Bar Mango.


The Last Hero has also teamed up with Beat 70 to create a very dark and moody piece of classic DnB with their track 'Project One.'2011 has been a busy year with releases out on In Da Jungle Recordings and Point Audio along with forthcoming releases on Lifestyle Recordings and 'Nightmares & Dreamscapes' due to feature on Dubkrafts forthcoming 'Cinematic Bass Music Vol 2 album in November, The Last Hero aims to finish the year strong and start 2012 even stronger! Beat 70 has had tracks signed now to Apexx, Dust, Extent Recordings, Phuzion and Lifestyle is adding his flavour to this track and has also started his own label 'Beat 70 music.' Already having music out on Sounds Of Soul Deep Vol. 1 and 2, Beat 70 is definitely shining through and getting noticed by some of the bigger producers within the scene.


Our newest signing, Terminus (Soul Deep / Armageddon Beats / Extent Recordings/ SP Breakz ) offers us some very heavy rhythms with his beautifully written track 'Poseidon.' This man has Intelligent Dn'B in his blood! Every track he creates takes you on a journey through memories gone and have the ability to capture your heart every time. This is an outstanding piece of production and we welcome Terminus to Extent with a lot of respect! Already taking part in label projects, We know that Terminus will be with us for a very long time as part of the label family.


Finally we have Cardiff’s very own and well established DJ aswell as producer Sub:Stance ( Digilab/ Black Reign Ltd/ Extent Recordings) who comes at us with his track ' The mission' which is real heavy to say the least and will surely grab your attention with his heavy reeses and complexed beats! You can also get to hear Sub:Stance playing at Aperture in Cardiff where you can catch him supporting Goldie on the 28th October at Clwb Ifor Bach.

You can purchase the EP at the following stores:

It will also be live on Beatport later on in the day @ http://www.beatport.com/label/extent-recordings/18969 and can also be found at iTunes and many more stores online!

For more info on Extent Recordings go to http://soundcloud.com/extentrecordings or add our Facebook group on https://www.facebook.com/pages/Extent-Recordings-Hq/130200493744365

Last but not least, we at the Extent Recordings Group would like to thank al of these great producers for their amazing tracks and we wish all of you out there a fantastic week!
Share:
Reddit Pinterest Tumblr WhatsApp Email Share Link
Top Bottom