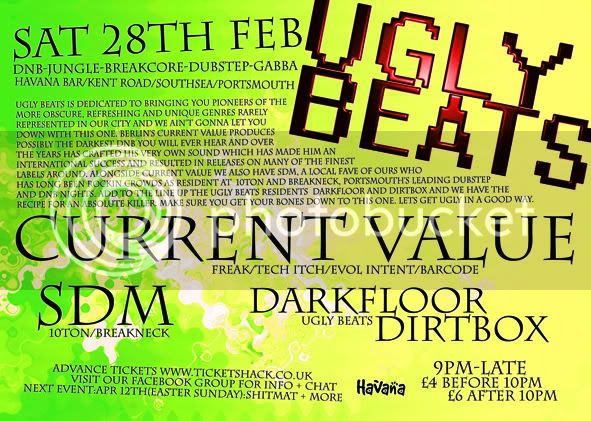 After a sellout party with the legendary DJ Scotch Egg, Ugly Beats is back once again and this time round we are bringing Berlin's Current Value across the pond to lend us a hand in bringing you another night of complete wrongness.

Ugly Beats is dedicated to bringing you pioneers of the more obscure, refreshing and unique genres rarely represented in our city and we ain’t gonna let you down with this one. Current Value produces possibly the darkest dnb you will ever hear and over the years has crafted his very own sound which has made him an international success and resulted in releases on many of the finest labels around. He has also worked on many collaborations with some of dnb finest such as SPL, Limewax, Counterstrike and Raiden.

The decidedly dark and often dissonant sound of techstep was developed in part by this very producer/dj and he continues to push the genre to its most evil limits with each release. Current Value rarely lands on these shores and this is one of just two dates in the UK.

Alongside Current Value we also have SDM, a local fave of ours who has long been rockin crowds as resident at 10ton and Breakneck, Portsmouth’s leading dubstep and dnb nights, and promises to be bring us a propa mixed bag of anything suitable that takes his fancy. Add to the line up the Ugly Beats residents Darkfloor and Dirtbox and we have the recipe for an absolute killer.