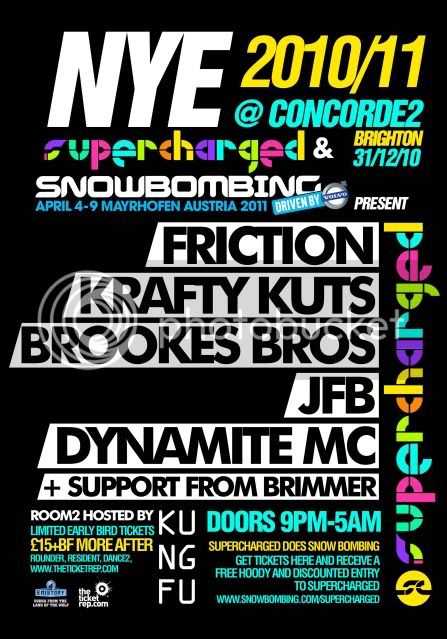 SUPERCHARGED DO SNOWBOMBING: NEW YEARS EVE PARTY
FRICTION / KRAFTY KUTS / BROOKES BROS. / JFB / DYNAMITE MC
ROOM 2 HOSTED BY KUNG FU
LTD. EARLYBIRD TICKETS £15 FROM THETICKETREP.COM
http://ticketreps.fatsoma.com/event.php?eid=35546
▀▀▀▀▀▀▀▀▀▀▀▀▀▀▀▀▀▀▀▀▀▀▀▀▀▀▀▀▀▀▀▀▀▀▀▀▀▀▀▀▀▀▀▀▀
FRICTION
Brighton based Dj Friction has found success through various highly acclaimed productions, starting with his debut 'Critical Mass' in 99'. One of the few dj's in the scene known more for his skills behind the decks than in the studio, Friction's 3 deck, highly technical style has seen him rocking dancefloors all over the world like not many can. He is highly regarded for his various mix cd's, the most recent, 'mixed' for Ministry of Sound being one of the highest selling dnb albums of 2010. As label manager for Shogun Audio he is also responsible now for the rise to success of a new host of dnb stars including Spectrasoul, Rockwell and most recently The Prototypes. Watch out!

KRAFTY KUTS
The man who started it all! Supercharged creator and Breaks legend Krafty Kuts will be in tow for a special homecoming set, showcasing the mixing style that has won him best dj at the Breakspoll awards more than any other dj. Honing his style since the late 80's, Krafty's knowledge for his music pours out when he plays, his breaks interspersed with the funk, rare groove and soul of his early days. After rising to fame with one of his tracks featured on Richy Rich's Kiss show in the early 90's, Krafty has had many high profile releases, some of which have been integral in shaping the uk breaks scene. With a constantly bulging

BROOKES BROTHERS.
Since their introduction to the scene in 2002, the Brookes Bros rise to fame has been unusually fast. Signed to Breakbeat Kaos in 2007, the pair found instant success with their releases; not just from the scenes leaders such as Andy C and Grooverider but also from people like Zane Lowe and Pete Tong. Their 2009 release 'Tear You Down' hit no.1 in the uk dance charts and was awarded Sara Cox's tune of the week. Their own releases alongside high profile remixes have seen the boys' calendars fill up with bookings to support their massive demand. With slots djing all over the world and a new release, 'Beautiful' set to be the next banger, the future is looking rosy for these two.

JFB
Is well known as one of the country's leading scratch dj's and beat jugglers. His immense skills led him to win the 2007 DMC world championships and his style has been progressing ever since. Working closely with Beardyman, JFB's skills behind the decks have been showcased all over the world, and can be seen on a regular basis in hometown Brighton at his hugely successful Battlejam events.