Resonance- The Big One! 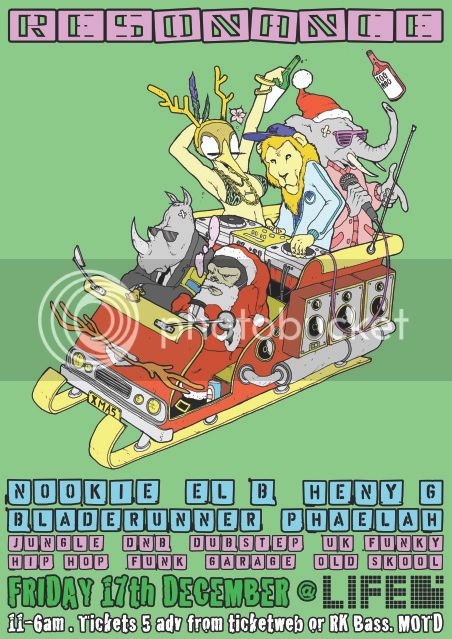 Our biggest rave yet in Brighton. We will be running across 3 rooms at Life to bring you a mix of all the stuff Resonance has become known for this past year. Pulling out the stops!

Earlybird tickets are going at £5! Ticketweb.com or RK Bass

NOOKIE
Undoubtedly one of the leading lights in the Drum & Bass scene, Nookie, aka Cloud Nine/Second Vision/New Balance (along with Blame), is London/Herts DJ/producer/artist/remixer Gavin Cheung. Nookie was catapulted into the limelight in 93 with his tune 'Give a little love', released on Reinforced and widely held as a classive rave anthem. Throughout the 90's, whilst working on his own label (Daddy Armhouse records) he had several high profile releases on Reinforced and Moving Shadow, leading towards his debut LP on Reinforced, 'The Sound of Music.' Moving on from this, he has gained notoriety as a remixer, providing work for Cutty Ranks, Doc Scott, Flourgon and Ninjaman, Omni Trio, Ganja Crew and many more. Nookie has felt big support through the years from dj's such as Grooverider, Fabio, Ray Keith and LTJ Bukem who signed the artist to Good Looking. This was then Nookie's home for multiple 12" releases, the 'Free the funk' ep's and his massive fourth album 'In@The Deep end". In 2006 Nookie started Phuzion records which has been the outlet for all his recent work, including the eagerly anticipated fifth album 'Beyond Blue'. He also currently runs the highly succesful 'Atmosphere' nights and has a weekly show on Mimistry of Sound Radio.

EL-B
El-B originally made his name as part of the legendary Groove Chronicles outfit, being the first artist to bring a dark edge to UK Garage with tracks like ‘Stone Cold’ and ‘1999’. Through his own Ghost Records imprint, El-B has sculpted and defined the modern dubstep sound and famously inspired the prodigious talent of Burial. With Tempa re-issuing some of his finest productions to date, El-B announced his return to the forefront of dubstep and garage and is one of the most in demand DJs in the scene. Now in 2009, El-B is putting the finishing touches to a 4 track EP and his first full-length album, which is set for release on Ghost Records later in the year.

BLADERUNNER
Based in East Anglia, Bladerunner has been dj-ing/producing for twelve years, tearing up dance floors across the country for clubs nights such as Herbal, One Nation, Dreamscape, Fusion and Kitchen. With airplay on BBC Radio 1, 1 Xtra and Kiss, and hosting his own show on Bassdrive Radio. Bladerunner’s talents were spotted by Ray Keith in 2004 and he was signed to the mighty Dread Recordings. Remixing jungle classics Renegade Terrorist, The Chopper and Dark Soldier. His own compositions include crowd favourites – The Rocker, Smokescreen, Terror Wars and Healing Force Dub. More recent work with Serum has seen some big hitting tunes including the club smasher 'Snakefist'. Bladerunner has once again stormed the dnb charts with the massive 'Back to the Jungle' released on Critical records. Ravers at his gigs can expect a varied range of music across the board with slick mixing and plenty of his own dubs and remixes keeping the action hot all night.

HENY G
DJ Heny.G has been a part of the dubstep scene before it even had is name, listening to pirate radio from the tender age of 7 and then learning to mix, making the progression from bedroom dj to having a regular slot on pirate Freeze fm. In 2001 Heny met up with long time friend Silkie and the two started mixing together at house parties and on various pirate stations. In 2001 the pair started producing, something which then had a potential platform with Heny gaining a job at the established Soho record shop, 'Release the Groove.' Silkie's 'Darksquare' formed the first 12" release on Heny's new label 'Grimey beats recordings.' Gradually meeting Razor Rekta, Conquest and Jay 5ive, the boys made the progression towards what is now Anti Social entertainment, their platform- React fm. From work at Uptown records, Heny developed a good relationship with DMZ, gaining his first dubstep booking at their November 05' night. This in turn led to Heny's regular show on Rinse, raising his popularity and importance within the scene. Nowadays Heny is respected as one of the old boys in the dubstep scene, and has played almost every rave up and down the country, his sexy, deep, soulful blends of dubstep in high demand. Recently we have seen some serious releases on his own imprint 'Gangsta Boogie music' and there are no signs of slowing.

PHAELAH
In 2006, classically trained musician and electronic sound scientist Matt Preston was swept up in the wake of the Dubstep phenomenon. His diverse influences resulted in an equally diverse musical output, ranging from the euphoric heights of Nordic electronica through cinematic breakbeat to the depth charges of Dubstep.

Phaeleh’s unique sound has garnered support from the scene’s leading artists, including Skream, N-Type, Scuba, Distance, Kryptic Minds, Oris Jay, RSD and Jakes to name but a few, as well as radio support on BBC Radio 1, BBC Asian Network, BBC 6 Music and Kiss FM. This has helped Phaeleh to top the sales charts with releases on Surface Tension, Against the Grain & Urban Scrumping as well as future releases on Skream’s Disfigured Dubz, N-Type’s Wheel & Deal Records and label of the moment Black Box.