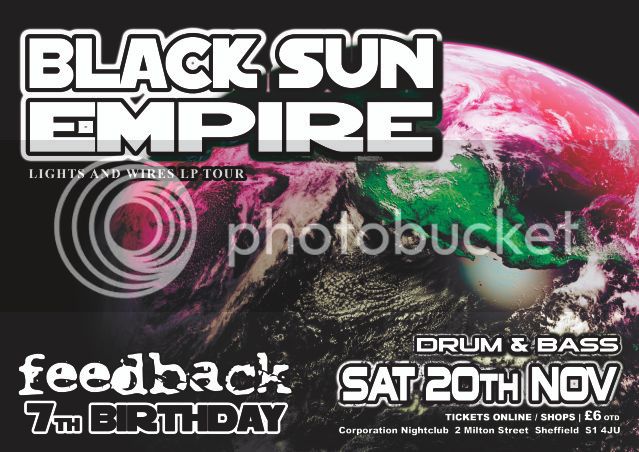 ✪✪✪ FEEDBACK 7TH BIRTHDAY SPECIAL ✪✪✪
As we find ourselves coming into Autumn, what better way is there to celebrate than with 7 years of Feedback serving up the darker, deeper, minimal end of drum and bass? Feedback has brought Sheffield many of the most prolific and up and coming DJ’s drum and bass has to offer like Calyx, Loxy, SpectraSoul, Bad Company, Rockwell, Fierce, Audio, D&R, C4C, Randall, TeeBee, Phace and these events have been coupled with Feedback Residents and a punishing tower of speakers Operation Sound System.

Black Sun Empire will be joining Feedback on our 7th birthday with their new album tour ‘Lights and Wires’ which launches this November. Expect to hear fresh dubplates of the finest dark and techy drum and bass! But that’s not all we have another treat, Andy H from First Word/TTC will be performing an exclusive Drum and Bass scratch set, and it’s his debut at Feedback. All of this madness comes to you through our Residents Fychu, Aggers and MC E-LL.

☣ FEATURING ON THE NIGHT

'Lights and Wires' album tour - check the link below for a taste of what's in store:

Black Sun Empire represent the finest in dark and techy dancefloor drum & bass. Since bursting onto the scene back in 2000, they’ve continued to develop their own unique style and sound, releasing numerous singles as well as three full-length LPs and establishing themselves as leaders in the field. With their awesome DJ skills and inspirational productions, Black Sun Empire have reached far beyond their native Holland. They’ve toured the world over, with highlights this year including Glastonbury and numerous other festival appearances, and continue to build on their growing reputation as some of the most exciting and consistent performers around. 'Lights and Wires' is their fourth full-length album, released in November 2010, and demonstrates their versatility across tempos whilst still staying true to their own sound.

Never losing touch with their roots, Black Sun Empire continue to promote their bi-monthly event ‘Blackout’ in their home town of Utrecht and are looking forward to it's seventh year anniversary in 2010. This well-established event has attracted some of the best in DJ talent from across the globe and regularly draws crowds of up to 1,000 people. As resident DJs, Black Sun Empire consistently captivates the crowds by mixing their freshest material together with live elements to bring an edge to their sets.

November 2010 brings the release of their fourth LP "Lights and Wires" and an accompanying world tour, taking them to the USA, Australia, New Zealand and beyond. With more releases planned across their labels and more in store for their own night Blackout, its plain to see why they're widely regarded as one of the hardest working DJ/producer teams around.

Also look out for the vinyl release of the album, set across two EPs catering for drum & bass and dubstep fans alike and in stores from this weekend:

Andy H is one of the most respected Hip-Hop DJ, Producer and Promoter in Sheffield. He is not only a local legend, but also nationally respected and recognised as an original, inspirational and very talented turntabalist.

Andy H is the co-founder of First Word and a resident at the biggest mid-week hip-hop and drum n’ bass night in the UK, The Tuesday Club, in Sheffield. Andy was a UK DMC finalist in 2008, and has played alongside the very best in the Hip Hop scene, including DJ Craze, Kentaro, Scratch Perverts and DJ Qbert. Although he specialises in Hip-Hop he also has a passion for drum and bass and can transfer his scratch and beat juggling skills onto this genre like a wizard. Expect dance floor friendly beats with heavy basslines and swinging drums – the perfect to get the party started and the crowd jumping. 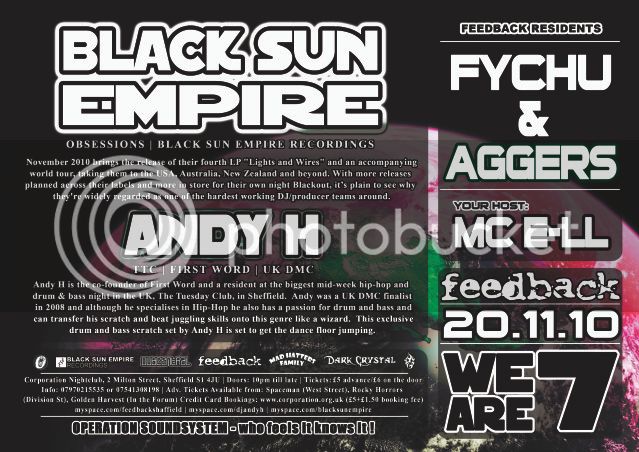